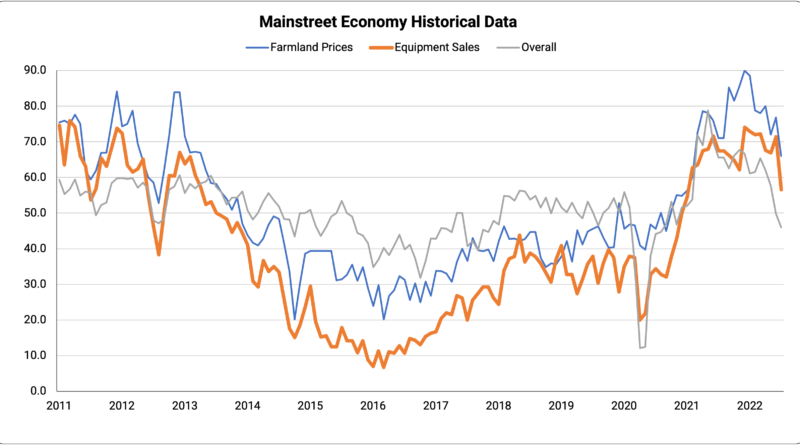 Farm equipment sales: The July farm equipment-sales index 56.5 –  This was the 20th straight month that the index has advanced above growth neutral, but it marked the lowest reading for the index since January 2021.

The Creighton University Rural Mainstreet Index (RMI) fell for the fourth straight month, sinking below growth neutral for a second consecutive month according to the monthly survey of bank CEOs in rural areas of a 10-state region dependent on agriculture and/or energy.

Farm equipment sales: The July farm equipment-sales index sank to 56.5 from 71.4 in June.  This was the 20th straight month that the index has advanced above growth neutral, but it marked the lowest reading for the index since January 2021.

Bankers were asked this month to identify the greatest risk for farmers over the next 12 months.  Regarding the top risks, 53.9% named rising input prices, 34.6% indicated falling grain/livestock prices, and 11.5% reported drought was the top threat.

Among bankers naming drought as the greatest risk, Jim Eckert, CEO of Anchor State Bank in Anchor, Ill., said “recent rains have improved crop prospects, but our area in Central Illinois is still dry compared to northern and southern Illinois.”

Regarding risks to farmers, James Brown, CEO of Hardin County Savings Bank in Eldora, Iowa, reported that “it’s the combination of higher input costs and a potential fall in commodity prices that are the biggest risks to farmers. Not just one or the other.”

Farming and ranching: The region’s farmland price index for July declined to 66.0 from June’s 76.8, marking the 22nd straight month that the index has moved above growth neutral. July’s solid reading was the lowest index since February 2021.

Banking: The July loan volume index declined to a still strong 72.0 from 78.5 in June. The checking-deposit index sank to 47.9 from June’s 57.4, while the index for certificates of deposit and other savings instruments slumped to 33.3 from 35.2 in June. “Escalating costs of farm inputs supported strong borrowing from farmers,” said Goss.

Even with significant 2022 input price increases, bankers expect to record a half percentage point decline in farm loan delinquencies over the next 12 months.

Hiring: The new hiring index improved to 60.9 from 57.4 in June. Labor shortages continue to be a significant issue constraining growth for Rural Mainstreet businesses. Despite labor shortages, the Rural Mainstreet expanded non-farm employment by 2.8% over the past 12 months. This compares to a faster 3.3% for urban areas of the same 10 states for the same period of time.

Confidence: The slowing economy, strong energy prices and agriculture input prices constrained the business confidence index to 26.0, its lowest level since May 2020, and down from 33.9 in June. This marks the lowest back-to-back readings since the beginning of the pandemic in April and May of 2020.