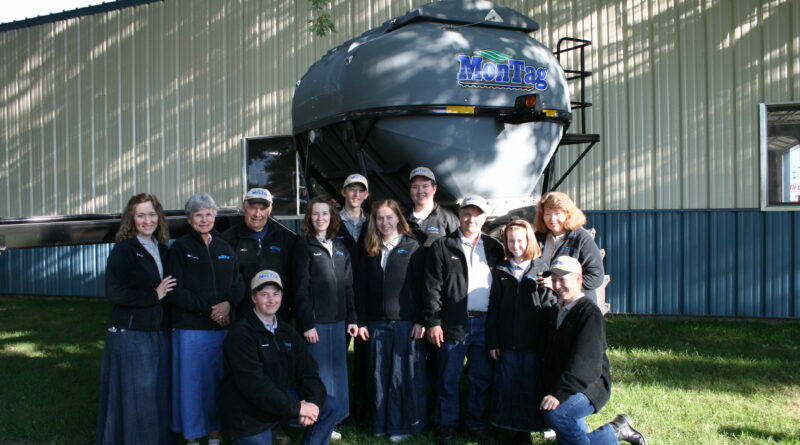 A Classic Tale of Shortline Success

When Anthony Montag entered the world in 1981, he was born into a story that, while uniquely his family’s own, resembles other families’ stories in the shortline industry. The Montags, however, may be among the last families in the industry that will have such a story to tell.

“I feel like Montag is at the end of a line of shortline manufacturers,” Anthony said. “Ours isn’t the type of story that was untellable in past generations, but it is one that is challenging to duplicate going forward. Culturally, from a business risk standpoint, it’s not impossible, but it’s challenging.”

It’s because there are chapters in this story in which the founder’s children pop wheelies in golf carts on the plant floor. A story in which nephews promise an uncle $5 if he can get himself out of a nine-ton tank the company has built without using a ladder. In this story, children are assigned work responsibilities long before they are of working age, and when those children become adults, they assume leadership positions on the floors they once roamed on scooters.

Above all, it is a story of a man with a knack for designing and building equipment and a spirit of entrepreneurism, who brought his family along in the founding and evolution of a company that has defied everyone’s expectations of what it would become.

Roger Montag, the patriarch of the Montag family, began as a farmer and blacksmith. In his shop class as a high school junior in West Bend, Iowa, he built a skid loader for scooping manure out of chicken coops. For his senior project, he built a machine for moving government grain bins. (That design launched a roughly 15-year side business during which Roger moved about 2,000 bins.)

Shortly after Roger finished high school in the late 1960s, he built a 60-by-40-foot shop on the farm and started a blacksmith business. In 1979, Roger married Theresa, and in 1981, Anthony was born. He was the first of eight children, all of whom would be home schooled through high school.

Until 1998, Roger farmed and raised livestock. Until 2006, he built grain wagons, meter systems and products other farmers suggested.

In 1986, Roger and two business partners started NewMatics, which built air-powered systems. Anthony joined the business after high school, which was the beginning of a shift in a new direction for the Montag family.

“We were looking to bring some new ideas into the market,” Anthony said. “NewMatics didn’t really have an appreciation for research and development, and the market was changing to more automated systems. So, the partners said, ‘Go for it,’ and we did.”

Montag Manufacturing incorporated in January 2005. Roger and Anthony were the only full-time staff. Rachael and Rebecca, Roger and Theresa’s second and third children, worked part-time.

“When we started, we were just giving a name to what we were doing,” Anthony said. “It was very much still the model of a blacksmith shop.”

The new company’s first machine order was one Anthony will never forget. The farmer lived near Valentine, Neb., about 300 miles from the Montag farm. The drive to the farm gave Anthony time to think.

“The anticipation of wanting to do it sort of drowns out the fear,” he said, “but this was a monster machine. It was a 24-row, nine-ton machine behind a planter. He wanted to pull dry fertilizer behind the planter. He was doing some very light tillage ahead of his planter. He was spraying the field. That was our first machine out the gate, and it was years before we did anything close to that again.”

That is not to say that quiet days were ahead for the Montags. In 2006, farm equipment dealers approached the family about selling their products, which led to a growth spurt. Sales in 2006 quadrupled sales in 2005. The next year, sales more than doubled again; Montag added a bigger cart to its lineup and built its Generation 1 fertilizer system.

In 2008, the shop on the farm would not suffice for the company’s workspace. They moved into a 72,000-square-foot building in Emmetsburg, Iowa.

Midway through 2009, after longer than four years of growth at a dizzying pace, Anthony said the phone stopped ringing at Montag Manufacturing. The company’s sales slid by 20 percent in 2010.

“We assessed our resolve to continue,” he said. “We were in too deep to go back. Our only option was to come out the other side. We had to let a few people go, which was tough, but it made us grow up, and we came back stronger.”

Until that slowdown, work arrived at Montag unsolicited. (“All we had been doing was answering the phone,” Anthony said, “and it had worked better than any of us could have imagined.”) The drop-off in sales prompted the family to hire sales professionals and think about customer engagement.

Then, much like the invitation from the dealers brought the business to a next level, the Montags bumped into an opportunity that would again dramatically accelerate growth.

“We had some OEs (original equipment manufacturers) who came to us and wanted to partner with us,” he said. “The first was Kuhn Krause. They were just coming to the market with the Gladiator, their new strip-till product, and our machine fit like a glove in their machine. To be chosen as the fertilizer equipment on the most successful strip till equipment on the market was phenomenal.”

The partnership was a success. Montag started hiring engineers and adapted its operations through lessons it learned working with Kuhn Krause.

“We had about a dozen companies come to us over a roughly three-year period wanting to develop OE partnerships,” Anthony said. “It was a huge shift to work on OE development in addition to dealer relationships.”

The success with Kuhn Krause and other OEs set up Montag Manufacturing for a series of changes in operations and management that brought it to the current decade. The company became certified as a Deere supplier and transitioned to more sophisticated software systems to manage inventory, engineering, and business operations. Montag would no longer rely exclusively on what Anthony characterizes as “tribal knowledge.”

“Quality was in the hands of the operator,” he said. “We had high expectations of our employees, and they didn’t let us down, but it wasn’t sustainable. It had been tribal knowledge, which has value. It supports that maverick style, that innovation and agility. But it needs to be tempered.”

As the company has expanded and matured, so has the family presence in the business. Roger continues full-time. His brother Dan—the uncle who had to ask for a ladder to get out of that nine-ton tank, then hand over the $5 he’d wagered—helps with deliveries, trade shows, and whatever comes up.

Seven of the eight of Roger and Theresa’s children work in the business today. Anthony is the company’s CEO. Rachael is in accounting. Rebecca manages the office. Benjamin is in manufacturing. William manages marketing. Joseph works in parts and also helps on the development side.

Margaret, the fifth child, is a Catholic religious nun. The youngest Montag, Mary, graduated high school in 2018 and works part-time in the office. Anthony’s wife, Jaimie, works on the company’s web site.

With the exception of the daughter who entered religious life, every member of the family lives within 15 minutes of one another. When they are together for a Sunday brunch or birthday, business does not dominate their conversation. When they are at work, they succeed by communicating with candor and kindness.

“Having a family-run business is not an easy endeavor,” Anthony said. “It takes open, honest communication. It takes charitable listening. There’s a lot more emotion that can come into a small family business. My hope is that the relationships among family members create a culture in which everyone who is part of the business feels connected, feels like they belong.”

On the Ag Economy

Montag’s profit margins aren’t as great as we’d like them to be. We’ve been competing in the market, but they are hard-fought sales. It’s not like the glory years.

Our customers are facing real challenges. We can jokingly say “It’s nothing that $5 corn wouldn’t fix,” but $5 corn isn’t coming soon. The value-shopping customer is real. The earlier days of buying the best regardless of cost are over. We hope our customers see it’s not all about price. We hope they look for that balance between cost and quality.

It was quite an honor. It was a validation of a lot of things we believe and work hard to achieve. We do what we do with the intent to help farmers save money, be better stewards of the land, and raise more product. We do it to make agriculture better.

On Innovation in the Shortline Industry

There is something about ag shortliners. You just have to innovate. You wake up in the morning and think “How can we do it different?” You see that in other industries, but it’s not quite the same. There aren’t a lot of mavericks, for example, in the aerospace industry. 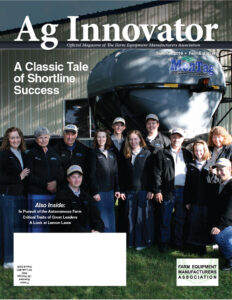