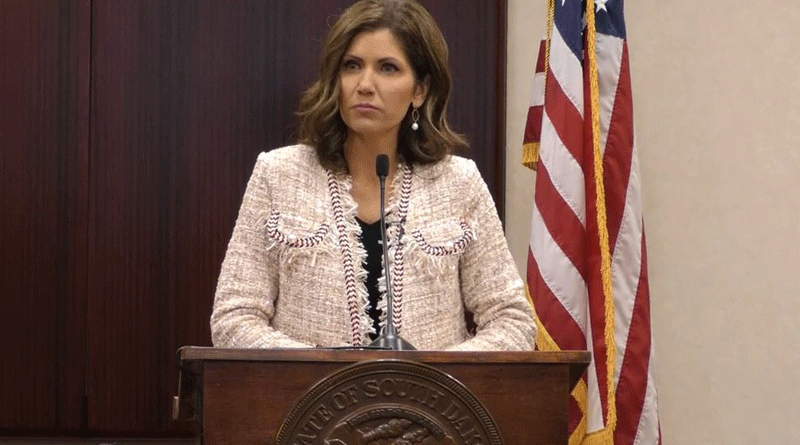 Gov. Kristi Noem says she’ll veto a bill legalizing industrial hemp if it’s introduced in the 2020 session.  Noem vetoed the hemp bill during the 2019 legislative session, and the showdown between Noem and the Legislature over the issue is setting up to continue into the 2020 session.

Noem took her industrial hemp opposition national on Tuesday, writing in a Wall Street Journal column, “If the issue comes up this year, I will veto it again.” South Dakota, Idaho and Mississippi are the only states that haven’t legalized industrial hemp.

When I was sworn in as South Dakota’s governor in January, opposing industrial hemp and marijuana legalization weren’t on my list of key issues. But during the first legislative session of my tenure, I vetoed a measure to legalize industrial hemp. If the issue comes up this year, I will veto it again.

I come from a farming and ranching family. Nothing would make me happier than finding a way to introduce a new cash crop into South Dakota’s agricultural economy—especially as we’ve been struggling with the effects of devastating floods and trade uncertainty. Industrial hemp isn’t that crop.

Across the country, states that have legalized hemp are struggling to enforce marijuana regulations. Hemp and marijuana look and smell the same. Police officers can’t tell the difference between them during a traffic stop.

“We have to be able to distinguish between hemp and marijuana,” a law-enforcement official in Ohio told a local news station after the Buckeye State legalized industrial hemp. “That is not possible for a human being to do. That has to be done through crime analysis.”

Yet many crime labs are also unable to distinguish between the two plants. They can detect the presence of tetrahydrocannabinol (THC), the psychoactive component of cannabis, but can’t determine how much is there. The technology to do so exists, but it costs hundreds of thousands of dollars. And a full crime analysis from a private lab can cost hundreds or even thousands of dollars per test, a price tag too steep for many local law-enforcement agencies. Even if they could afford it, the results often take weeks.

Since Texas passed an industrial hemp law in June, prosecutors have dropped hundreds of marijuana cases and have stopped accepting new ones until more-accurate tests are available to discern the drug from its now-legal counterpart. It’s easy to see why: Without the ability to test the level of THC in a plant, labs can’t provide useful scientific evidence for use in court. Any case of suspected marijuana possession in states with legal hemp requires this expensive and time-consuming testing. Prosecutors quickly get overwhelmed.

Many states are experimenting with legalizing marijuana. Until law enforcement can quickly and affordably differentiate between marijuana and hemp, states that have legalized hemp have essentially legalized marijuana as well.

Every experiment needs a control. I believe the social experiment our nation is conducting with highly potent legal weed will end poorly. But to create evidence for a comparison, we need leaders willing to stand up and say, “No.”