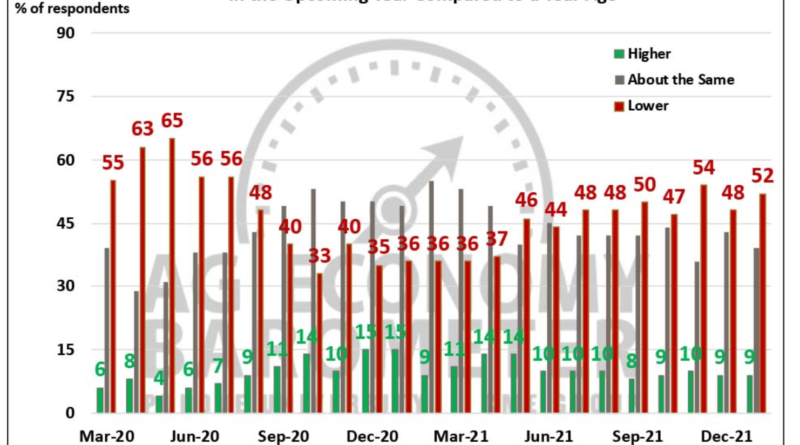 Farmer sentiment weakened in January as the Purdue University/CME Group Ag Economy Barometer declined 6 points to 119, down from 125 a month earlier. This month’s decline leaves the barometer just three points higher than in November and is the second-lowest sentiment reading since July 2020.

The decline was driven primarily by weaker perceptions regarding the current situation. The index that measures sentiment of current conditions fell by 13 points from a month earlier to 133. Concerns about rising input costs and ongoing supply chain disruptions contributed to weakness in the current conditions index.

The Index of Future Expectations changed little this month.
The Purdue University-CME Group Ag Economy Barometer sentiment index is calculated each month from 400 U.S. agricultural producers’ responses to a telephone survey. This month’s survey was conducted from January 17-21.

The Farm Capital Investment Index weakened slightly this month, falling 4 points to a reading of 45. The investment index has been range-bound, fluctuating between 39 and 49, since September. Fifty-two percent of respondents in January said they plan to reduce their farm machinery purchases in the upcoming year, up from 48 percent last month. Supply chain issues continue to hamper farmers’ investment plans as, for the third month in a row, over 40 percent of producers reported that low farm machinery inventories were holding back their purchase plans.

The disruptions extend not just to input pricing, but also input availability. In January, 28 percent of producers responding to the survey said they have had difficulty purchasing crop inputs from suppliers for the 2022 crop season. In a follow-up question posed to producers experiencing difficulty in procuring crop inputs, respondents reported difficulty in purchasing a broad spectrum of crop inputs including herbicides, insecticides, fertilizer, and farm machinery parts.