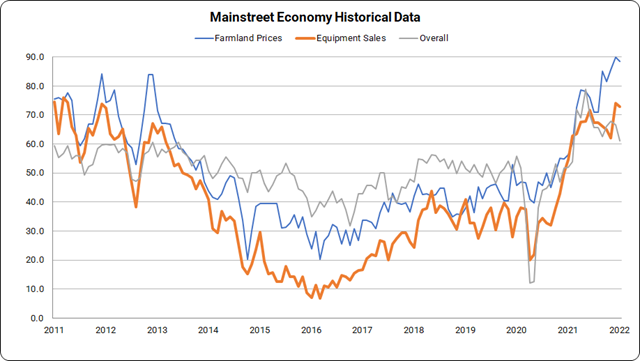 The Creighton University Rural Mainstreet Index (RMI) declined in January, though it remained above growth neutral for the 14th straight month, according to the monthly survey of bank CEOs in rural areas of a 10-state region dependent on agriculture and energy.

The region’s overall reading for January fell to 61.1 from December’s 66.7. The index ranges between 0 and 100 with a reading of 50.0 representing growth neutral.

The January farm equipment-sales index slipped to a very healthy 72.4 from 74.1 in December. This is the 14th straight month that the index has advanced above growth neutral.

Farm equipment sales index readings over the past several months are the strongest string of monthly readings recorded since spring 2011.

This month, bankers were asked to identify the greatest 2022 risk for farmers in their area. Bankers overwhelmingly named rising farm input prices, such as fertilizer, as the top farm threat.

Bankers ranked disruptions of the delivery of farm inputs and rising interest rates as the second and third greatest 2022 threats to farm operations.

After declining for five consecutive months, the confidence index, which reflects bank CEO expectations for the economy six months out, rose for a second straight month to 61.1 from 55.2 in December.