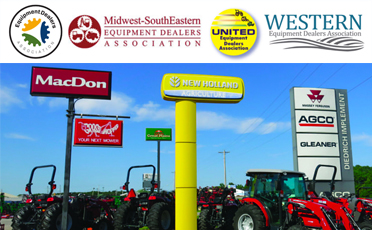 The next step is a vote by dealer members of each association. That process should conclude by spring with a goal to finalize the consolidation by July 1.

The new North American Equipment Dealers Association (NAEDA) will represent over 4,000 dealer members in the United States and Canada.

“The goals, objectives and vision of our four associations are closely aligned,” said Tom Rosztoczy, who is president and CEO of Stotz Equipment and chair of the long-range planning group. “This consolidation will be undertaken on a long-term sustainable basis with a continued commitment to grassroots involvement and a localized approach.”

Rosztoczy said dealer members of the four associations will experience little to no change in their daily interactions with their association after the consolidation.

“Our four boards of directors’ have acknowledged that the dealership network has evolved over the past number of years, and the service level that they require from their association has changed,” Rosztoczy said. “A major reason for proceeding with this merger is our members will benefit from a larger, financially strong association that will provide more services to address the needs of today’s equipment dealer.”

He said this is the right time to consolidate and anticipates the move will offer a level of industry recognition that members enjoyed in the earlier version of NAEDA, which was renamed the Equipment Dealers Association as part of a shift toward regional associations. He also said the new structure will continue to provide the benefits of regional equipment dealers associations across North America.

“This consolidation is as a result of a dealer led process that was started in October 2018,” Rosztoczy said. “All regional equipment dealer associations were invited to participate and to contribute on how we can have a strong national association, while at the same time position our organization to address the changing needs of equipment dealers across North America.”

Six regional associations opted out of the consolidation effort. They were:

Hours after the announcement of this consolidation, four of the six regional associations that opted out sent a letter urging their members who also belong to EDA to vote against the merger.

“EDA was formed as the equipment dealers’ National Association,” the letter said. “Its role as the voice of equipment dealers across the U.S. is crucial and very challenging. It requires a focused mission and dedicated human and financial resources. Our national association, EDA, should not dedicate limited resources attempting to manage the affairs of individual states, provinces, and two countries. The concept would require EDA to advocate to at least 28 different state and provincial governments … in addition to the U.S. and Canadian governments!”

The letter came from the boards of directors of the Canada East Equipment Dealers Association, and the Deep Southern, Far West, Montana, and Pioneer equipment dealer associations.