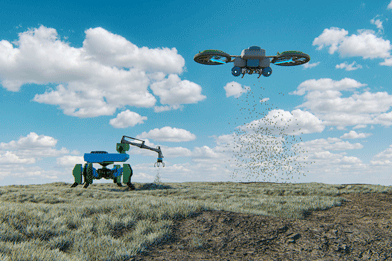 Some farmworkers could be replaced by robots sooner than we think.

In places like California, where the minimum wage ticked up a dollar this year and will be $15 an hour for larger employers in 2022, robots are planting, harvesting, milking, weed-killing, monitoring soil health, predicting when a plant will be ready for harvest, and more.

“In the past, labor was relatively cheap compared to technology. Today the cost of labor has risen. So technology and labor costs are getting much closer,” said Josh Ruiz, vice president of agricultural operations at Church Brothers Farms in Gonzales, Calif. “While I wish I could pay everybody who works for me $100 an hour, the problem is our consumers are not willing to pay that kind of food price,” he said.

The shift is not exclusive to California. Labor costs, climate change and growing food demand are ushering in an era of machine modernization across the nation’s farms.

Advocates for robotic farming tout increased automation as a step toward improving efficiency while freeing people from monotonous, back-breaking tasks that few laborers want to do. Labor unions welcome more machines, so long as farmworkers benefit, too.

“We don’t want to stand in the way of creating a production method that’s less taxing on the (human) body,” said Baldemar Velasquez, president of the Farm Labor Organizing Committee. “But agriculture is like any other job. As soon as automation begins to take place, it creates a problem (for) job opportunities.”

Automation has been plucking away at the work humans do on the farm for decades. But now, in the age of artificial intelligence, robots and computer vision are expanding the potential.

Cameras on drones provide vast information on crop health. Robotic lenses can zoom in on seedlings to predict when vegetables will be ripe. Machines can roam without operators and kill weeds.

Many small farms that operate with slim profit margins have fewer options to go high-tech. However, those that can afford it welcome the shift, and they have more options than ever with ag tech start-ups, AI-powered systems, and precision farming tools.

The market for advanced farming tools was estimated to be about $7 billion in 2020, and it’s projected to reach $12.8 billion over the next four years, according to the research firm MarketsandMarkets.

It’s true that AI-powered farm machines may one day be able to perform most tasks that require people today. But for the time being, humans have a leg up in some situations. Robots tend to have dexterity problems, which can cause them to hold objects like fruit and vegetables too aggressively.

“You don’t go to the grocery store and buy an apple that’s all bruised and brown,” Velasquez said. “So some things are going to continue to require human hands.”