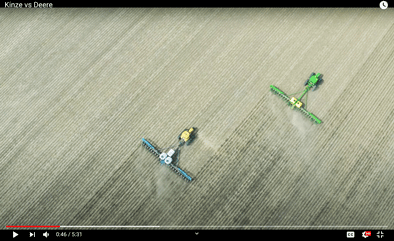 This summer, Kinze Manufacturing posted a video to YouTube showcasing what it called a direct, farmer-led comparison between its 4905 planter and John Deere’s rival ExactEmerge planter.

The video got a response from Deere: a cease-and-desist letter, which Kinze posted on Twitter. In the letter, Deere accused Kinze of wrongful and uneven comparison.

Specifically, it said the video claims, without supporting data, the Kinze planter had a ‘Positive Win Ratio’ when compared to the John Deere planter.

Deere challenged the methodology, saying the planters were pulled by different staples of tractors and configured differently—Kinze with liquid system and John Deere without.

The letter Kinze received called for a response within seven days. Kinze took only one. It posted a detailed rebuttal that refused to deactivate the link to the product comparison video.

She said the video made it clear that this was not a test plot but rather a “real-world, uncontrolled test” performed by a farmer.

Veatch reiterated there was no meddling and no payment from Kinze.

Kinze posted the spreadsheets comparing data from the two machines and issued a challenge.

Veatch suggested a third party would analyze the data and release findings. The winner gets bragging rights, and the loser pays $10,000 to Habitat for Humanity.

Deere had not responded to that offer at press time.