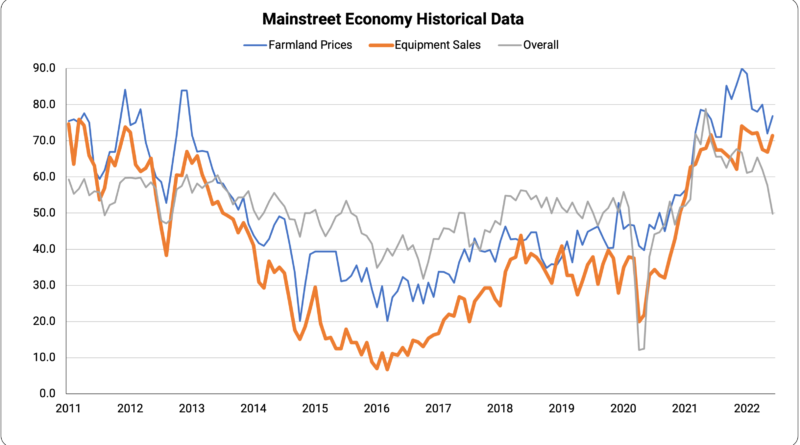 June Survey Results at a Glance:

OMAHA, Neb. — The Creighton University Rural Mainstreet Index (RMI) fell from May’s solid reading, sinking below growth neutral for the first time since September 2020, according to the monthly survey of bank CEOs in rural areas of a 10-state region dependent on agriculture and/or energy.

Overall: The region’s overall reading for June slumped to 49.8, its lowest level since September 2020, and down from May’s 57.7. The index ranges between 0 and 100 with a reading of 50.0 representing growth neutral.

This month, bankers were asked their U.S. recession expectations for the next 12 months. Approximately 92.9% rate the likelihood of a U.S. recession above 50%. Only 7.1% rated a recession probability below 50%.

“Much like the nation, the growth in the Rural Mainstreet economy is slowing. Supply chain disruptions from transportation bottlenecks and labor shortages continue to constrain growth. Farmers and bankers are bracing for escalating interest rates — both long-term and short-term,” said Ernie Goss, PhD, Jack A. MacAllister Chair in Regional Economics at Creighton University’s Heider College of Business.

Jon Schmaderer, CEO of Tri-County Bank in Stuart, Neb., reported that “fuel prices are starting to have a severe negative impact on rural Nebraska.”

Farming and Ranching: : The region’s farmland price index for June advanced to 76.8 from May’s 72.0, marking the 21st straight month that the index has moved above growth neutral. Over the past several months, the Creighton survey has registered the most consistent and strongest growth in farmland prices since the survey was launched in 2006.

So far in June, Peoples Company Appraisal Team tracked 32 cropland auctions across 17 Iowa counties. In total, 4,305 acres of cropland sold in auctions for $57.8 million, or an average of $13,426 per acre.

Jim Eckert, president of Anchor State Bank in Anchor, Ill., reported that “in our area all crops are planted and looking good but are behind other years due to cool weather and insufficient rains.”

Farm equipment sales: The June farm equipment-sales index climbed to 71.4 from May’s healthy 66.9. This was the 19th straight month that the index has advanced above growth neutral. Readings over the past several months are the strongest string of monthly readings recorded since the beginning of the survey in 2006.

Banking: The June loan volume index rose to 78.5, its highest reading since May 2019, from last month’s 73.0. The checking-deposit index increased to 57.4 from May’s 54.0, while the index for certificates of deposit and other savings instruments sank to 35.2 from 38.0 in May. “Escalating costs of farm inputs pushed borrowing up to its highest reading since May 2019,” said Goss.

Hiring: The new hiring index fell to 57.4 from 61.5 in May. Labor shortages continue to be a significant issue constraining growth for Rural Mainstreet businesses. Despite labor shortages, Rural Mainstreet expanded non-farm employment by 2.6% over the past 12 months. This compares to a faster 3.3% increase for urban areas of the same 10 states for the same period of time.

Confidence: Surging energy prices and rocketing agriculture input prices constrained the business confidence index to 33.9, its lowest level since May 2020. This marks the lowest back-to-back readings since the beginning of the pandemic in April and May 2020.

Tables 1 and 2 summarize the survey findings. Next month’s survey results will be released on the third Thursday of the month, July 21st, 2022.

Tables 1 and 2 summarize the survey findings.