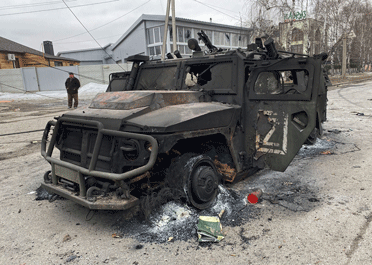 Howard Dahl is the president and CEO of Amity Technology, which manufactures sugar beet equipment in Fargo, N.D. and sells the equipment in Russia, among other places. Dahl, who spoke to members at a fall convention in 2014, has an extensive understanding of the people, the issues, and the farm equipment industry in Eastern Europe. He shares his thoughts here.

What’s your connection to Eastern Europe?
My experience with Eastern Europe goes back to 1974 when Steiger Tractor did a project in Hungary. My wife and I lived in Vienna and travelled in and out of Hungary. We got a taste of communism then. It was life changing for us.

We did business in the 1980s with our Concord air seeder in Czechoslovakia and Hungary, and again, we got a deep sense of the despair of living under Soviet rule. It was formative for me.

Our business there continued after the Soviet Union fell in 1991. Our main business since 2000 has been our sugar beet harvesters and our former Wil-Rich equipment. We have done about $350 million of business over the past 30 years in the former Soviet Union.

I have made 93 trips there and have many close relationships in both countries. We have eight employees at our sugar beet equipment operation in Russia. And, I am chairman of the board of Astarta, which is the largest sugar company in Ukraine.

In Ukraine, it is another matter. Astarta has thousands of employees. The processing of sugar beets was continuing (as of Thursday). There are no exports leaving the country, but the intent is to plant 700,000 acres of crops this year, which includes almost 100,000 acres of sugar beets. It is incumbent that the crop goes in the ground. The world needs it.

I am in conversation with the board of Astarta regularly.

What about the other acquaintances you’ve made over these past decades in Russia?
There are many brave Russians who are speaking openly. There is opposition to Putin. About 7,000 have been arrested (as of Thursday). There is a need for 100,000 to really make a point, which is unlikely to happen.

Most of the people I know, Russian friends, are strongly opposed to the invasion. I have only one acquaintance who has defended this. It is someone listening to Russian media. It is a challenging situation that Putin controls the media.

How has Amity Technology been affected by the war thus far?
We had 12 sugar beet harvesters and defoliators ready to ship. They are on hold. We had parts containers in transit that were returned to our factory.

We have some emergency parts we are going to airfreight to the Polish border. Our Ukrainian customers are going to try to cross the border, get these parts, and take them to the farms.

The impacts of this war on the world, on agriculture, and on manufacturing are impossible to estimate today. What are your thoughts on immediate effects?
Russia is a huge supplier of both steel and fertilizer. If you take time to look at the 120 billionaires in Russia, some of the wealthiest Russians are fertilizer kings. So, the Russians who control that fertilizer exporting business, they love the high prices of fertilizer. They are making more money than ever. Even if we sanction, they can sell it to India or some other country, and that country can sell it to us. It is good for them.

Steel has finally been coming down in price. I think today the very wealthiest Russian is Alexey Mordashov, the owner of Severstal, which has factories in many countries including Canada and the United States. Russia has abundant resources for metals and mining that have been very profitable. I expect we are going to see continued supply chain disruptions over many items.

Do you see hope of a quick resolution?
This all rests with Putin. He seems to be a different person than he was years ago when the world saw him as a calculating chess player who anticipated the moves of others. Some are questioning his mental stability.
One hopeful sign I see is that some of the wealthiest Russians know the truth. They are not blinded by the propaganda that Putin is pushing. If enough of them do speak out, that may influence a better outcome.

I also think the mothers of Russian soldiers are going to have a lot to say about this. If there are enough casualties, enough young men lost, there will be an outcry. Very few of the soldiers expected to invade in a full-scale war. They thought they were doing exercises. That has been clear for some of the soldiers who were captured.

I am less hopeful that anyone in Putin’s inner circle will speak truth to him.

There is a market share question there for equipment manufacturers as today there is much competition. For agriculture overall, Russia has become more self-sufficient since 2014. They have increased their beef production and accelerated their work in value-added agriculture.

I think the greater concern from the whole world is that even if you have a 30 percent reduction in crop in Ukraine, the poorest of the poor in the world will suffer the most because of a food shortage.

What are you telling people here who ask what they can do?
I am telling them we can pray. We can pray for peace and the protection of the many beautiful people there.