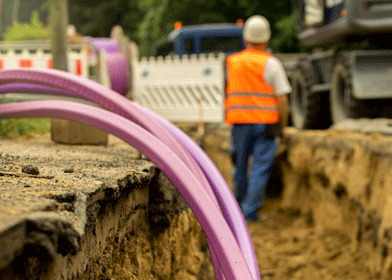 The new spending bill is an investment that the president has compared to the building of the transcontinental railroad and Interstate Highway System. The White House is projecting that the investments will add, on average, about 2 million jobs per year over the coming decade. Here’s a breakdown of what’s in the bill:

Roads and Bridges
The bill provides $110 billion to repair the nation’s aging highways, bridges and roads. According to the White House, 173,000 total miles of America’s highways and major roads and 45,000 bridges are in poor condition. And the almost $40 billion for bridges is the single largest dedicated bridge investment since the construction of the national highway system, according to the White House.

Internet Access
The plan includes $65 billion for broadband access to improve internet services for rural areas, low-income families and tribal communities. Most of the money will be made available through grants to states.

Public Transit
The $39 billion for public transit in the legislation expands transportation systems, improves accessibility for people with disabilities and provides dollars to state and local governments to buy zero-emission and low-emission buses.

Passenger and Freight Rail
To reduce Amtrak’s maintenance backlog, which has worsened since Superstorm Sandy nine years ago, the bill provides $66 billion to improve the rail service’s Northeast Corridor (457 miles), as well as other routes. It would be the largest federal investment in passenger rail service since Amtrak was founded 50 years ago.

Modernizing the Electric Grid
To protect against the power outages that have become more frequent in recent years, the bill allocates $65 billion to improve the reliability and resiliency of the power grid.

Airports
The plan calls for $25 billion to improve runways, gates and taxiways at airports and to improve terminals. It would also improve aging air traffic control towers.

Water and Wastewater
The bill includes $55 billion for water and wastewater infrastructure. It calls for $15 billion to be spent to replace lead pipes and $10 billion to address water contamination from polyfluoroalkyl substances.

Paying For It
The five-year spending package would be paid for by tapping $210 billion in unspent COVID-19 relief aid and $53 billion in unemployment insurance aid some states have halted, along with an array of smaller pots of money, like petroleum reserve sales and spectrum auctions for 5G services.