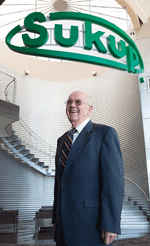 Eugene will be remembered by his family and many friends, colleagues, and members of the agriculture community as a leader, innovator, and exceptionally caring and generous person. Details on services and arrangements will be shared when available.

SHEFFIELD | When Eugene Sukup started his grain bin and farm manufacturing company in 1963, there were three employees.

By 2008, that company had grown to more than 400 employees and served organizations worldwide.

Sukup, 89, of Sheffield, died Thursday at Mercy Medical Center–North Iowa in Mason City. He was a local business icon who was heavily involved in the community and kept his business in Sheffield despite its tremendous success.

Sukup and his wife, Mary, founded Sukup Manufacturing in 1963 in a welding shop in Sheffield. His first patent was for grain stirring equipment to keep corn from spoiling in a bin.

Sukup now holds 85 patents and has sales in all 50 states and more than 80 countries. It employs more than 600 people and has global distribution locations in Denmark and Ukraine.

In 2011, his company helped fund the second phase of Iowa State University's Biorenewables Complex. Charles Sukup, one of Eugene's sons and president of Sukup Manufacturing, said at the time the company was happy to support a program that researches solutions for clean water, food and renewable energy for people worldwide.

His advice for anyone looking to start their own business was simple.

"Love what you're doing — and pray a lot," Sukup said.