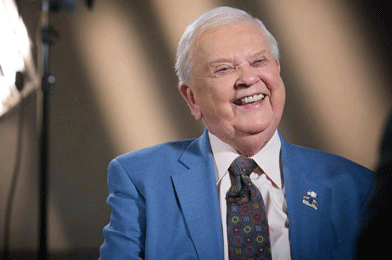 Orion Samuelson, whose booming voice has been carried across the airwaves into homes and tractors for 60 years, is retiring at the end of the year.

Samuelson, 86, has reported on agriculture and business for WGN 720-AM since 1960. He is a beloved hall of fame broadcaster and Chicago media icon.

Samuelson was born on a dairy farm near LaCrosse, Wis. He worked at radio stations in that state until, at 26, he got the call to join powerhouse WGN.

“When I made the drive in my 1949 blue Chrysler New Yorker 60 years ago, I was very uncertain about what I was getting into, because I was a farm kid [thinking], ‘What will I do in the big city?’, Samuelson said.

In addition to hosting his signature farm reports on radio and TV, and anchoring “The Noon Show” from 1960 to 2003, Samuelson emceed “The National Barn Dance” and read the first bulletin on the air of President John F. Kennedy’s assassination in 1963. As host of “The U.S. Farm Report” (now “This Week in AgriBusiness” with Max Armstrong), he became the best-known voice of agriculture in America.

He won more awards than he can count. Among his most cherished is an honorary doctorate degree from the University of Illinois.

He and wife Gloria plan to “go back and forth to Arizona and not have to worry about setting the alarm clock and making sure I’m ready for the next report,” he said.

Samuelson delivered the keynote address at the 2016 fall convention in San Diego.