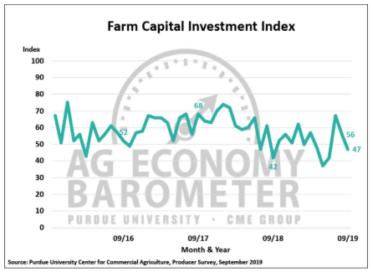 The October report of the Ag Economy Barometer dipped slightly to a reading of 121, down just 3 points from the previous month. The readings compare September data to August.

Although the barometer’s decline was small, there was a relatively large sentiment shift among ag producers as they were noticeably more pessimistic about current conditions on their farms and in the U.S. ag economy but somewhat more optimistic about future economic conditions, both compared to one month earlier.

The Index of Current Conditions declined from a reading of 122 in August to 100 in September. This was in contrast to the Index of Future Expectations, which rose 6 points compared to August, with a September reading of 131.
The barometer is based on results from a nationwide telephone survey of 400 U.S. crop and livestock producers.

Concerns about current economic conditions on their farms spilled over into producers’ perspective on making large investments in their operations.

The Farm Capital Investment Index, which is based upon a question posed to farmers each month regarding the advisability of making large investments in their farming operations in items such as machinery or buildings, declined to 47.

This was down 9 points compared to August and 20 points below the Farm Capital Investment Index’s highest reading of this calendar year, observed in July when crop prices were near their 2019 peak.