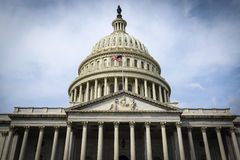 If you want the U.S.-Mexico-Canada Agreement to be ratified, they said, you must lose the steel and aluminum tariffs, and you need to cut a deal with House Democrats. They said that as long as the metals tariffs remain, the president will not have enough votes to approve the deal in the GOP-controlled Senate.

“I don’t know how much it matters in the House, but I think it definitely matters for our vote count over here,” said Senate Majority Whip John Thune.

Ahead of the meeting, which included Georgia Sen. Johnny Isakson, the Georgia Fruit and Vegetable Growers Association called attention to a new study from researchers at the University of Georgia that forecast the state would lose nearly $1 billion in annual economic output and over 8,000 jobs unless action is taken “to slow down the increase in low-priced Mexican imports of blueberries and vegetables.”

The association called on the administration and lawmakers to find a solution.

Meanwhile, House Speaker Nancy Pelosi stood her ground on the USMCA, reiterating that Democrats will not consider the NAFTA replacement for a vote unless their concerns about enforcement are addressed as “part of the agreement.”

“It can’t be a sidebar or side letter, later legislation or anything like that,” she said. Enforcement, she said, is an “overarching issue.”