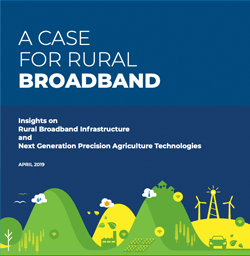 Agriculture Secretary Sonny Perdue last week unveiled a report that put at tens of billions of dollars the economic impact that improvements in rural broadband could have on the U.S. economy.

In A Case for Rural Broadband: Insights on Rural Broadband Infrastructure and Next Generation Precision Agriculture Technologies, the USDA found that deployment of both broadband e-Connectivity and Next Generation Precision Agriculture Technology on farms and ranches could result in annual economic benefit of more than $47 billion.

The report also found that if broadband infrastructure and digital technologies at scale were available at a level that meets estimated producer demand, the U.S. economy could realize benefits equivalent to nearly 18 percent of total agriculture production. That is at least $18 billion in annual economic benefits that only high-speed, reliable internet can provide.

The USDA will be engaged in infrastructure and technology deployment, including financing rural capital investments and supporting producers who are exploring which Next Generation Precision Agriculture Technologies are best.     Source: Benton Foundation