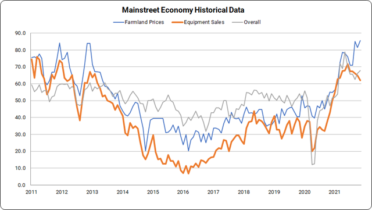 CEOs from rural banks in a 10-state region dependent on agriculture and energy provided insights to researchers that led them to conclude that economies continue to expand in these communities.

Readings for farm equipment sales and farmland prices over the last several months represent the strongest consistent growth since 2012. The November farm equipment-sales index, while it slipped by just over two points since October, registered a strong 62.1, Creighton University reported. The farmland price index improved to a record high of 85.5 from October’s 81.5.

The confidence index, which reflects bank CEO expectations for the economy six months out sank for the fifth straight month to 48.4, its lowest level since August of last year, and down from October’s 51.8.