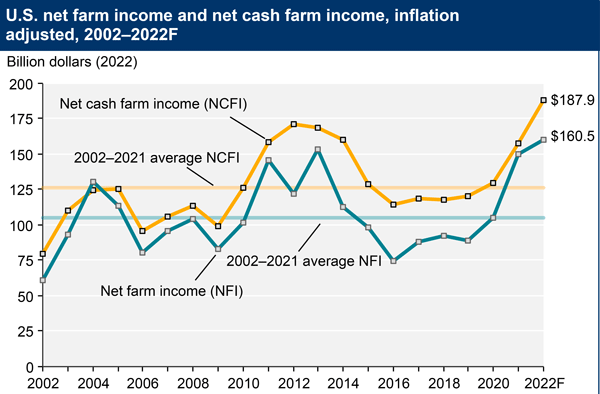 High commodity prices, due in part to warfare in Ukraine, will propel U.S. net farm income to a record $160.5 billion this year, despite a steep climb in expenses, said the Agriculture Department on Thursday. Farm income, a gauge of profitability, would be 14% higher than last year and twice as high as three years ago during the Sino-U.S. trade war.

With good times in the farm sector, the value of farm assets would climb 10% this year, following a 10% increase in 2021 — the No. 2 year for farm income — said the USDA in its Farm Income forecast, issued three times a year. Farm debt would climb more slowly, and the debt-to-asset ratio, a measure of financial health, would drop to 13.05%, its first decline since 2011.

Crops and livestock will generate $541.5 billion in cash receipts, up 24%, or nearly $106 billion, from last year. Almost all of the increase, $96.8 billion, would be the result of higher prices, calculated USDA economists. Corn, wheat, and soybean would fetch an additional $37 billion this year compared to last. Higher broiler chicken prices would boost receipts by 55%. Revenue from cattle, hogs, turkeys, and milk also would climb. “Cash receipts for chicken eggs are expected to more than double,” said the USDA.

Commodity prices boomed with the return of China to the U.S. market in fall 2020, and they surged again after the Russian invasion of Ukraine last February. The invasion disrupted grain and fertilizer exports from the Black Sea region. Ukraine and Russia are major wheat exporters, and Russia leads in fertilizer exports.

Farm production expenses were forecast to rise 18%, to a record $442 billion this year. “This would represent the largest year-to-year dollar increase in nominal terms on record,” said the USDA. Nearly every category of expense would go up. Fertilizer, lime, and soil conditioners would increase by 47%, fuel and oil by nearly 48%, interest costs by 41%, and livestock feed, the largest category, by 17%.

Farm groups have focused on the rise in expenses and have asked lawmakers, with a new farm bill to be written in 2023, for higher reference prices, a factor in calculating crop subsidies, and more protection through the government-subsidized crop insurance program.