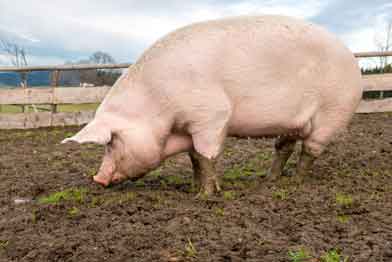 Pork producers last week called for a swift congressional response to an unprecedented crisis facing the industry as a result of COVID-19.

The press event came as a relief bill—the RELIEF for Producers Act—was being considered in Congress. The bill would compensate hog farmers for animals that have already had to be euthanized, and those that might have to be euthanized in the future.

According to Meyer, between 300,000 to 400,000 animals were euthanized in May. That was at the peak of the COVID-19 crisis, when restaurant shutdowns were almost total, pork processing plants were operating at only 60 percent of capacity, and food chains were in disarray.

Today, plants are back to 95 percent of capacity. The remaining 5 percent capacity may not be restored, because it reflects adaptations to distance employees from one another.

In addition to euthanizing hogs, producers reacted by adjusting feed quality to slow the growth of their animals. That led to about 2 million hogs being slowed down and “backed up” in the system by late June.

Meyer said that according to the USDA, about 14 million head of hogs are in the 180-pound range, the single largest category.

“We should have slaughtered at least 1 million of these pigs by now,” he said.

NPPC leaders say these circumstances will force some hog farmers out of business.

“The only question is, how many,” said Nick Giordano, vice president and counsel, global government affairs for NPPC. “That will depend on two things: what happens with COVID, and what the government does. We know we will not be made whole. We are only asking to be allowed to remain in business.”

Meyer characterized the situation as “the largest economic hit” he has seen producers take in 30 years.