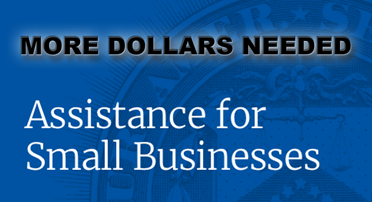 A partisan impasse over fresh COVID-19 relief spending stretched through Easter weekend amid a call from state leaders for more federal assistance and a small-business loan program that could run out of funds as early as this week.

Republican lawmakers want to add $250 billion to the $350 billion small-business support plan approved in late March. While Democrats say they, too, support more money for the fund, they also want to expand access to the loans. In addition, they want to include $100 billion for hospitals and $150 billion for state and local governments along with the small-business aid.

Talks slowed over the weekend as negotiators observed the Easter holiday. Lawmakers are seeking agreement early this week.

The small-business program, which Congress created in a $2.2 trillion relief bill passed last month, has approved $178 billion in loans—more than half its $350 billion total, according to Sen. Marco Rubio (R., Fla.), chairman of the Senate Small Business and Entrepreneurship Committee.

“This will not be Congress’s last word on COVID-19, but this crucial program needs funding now,” the top Republicans on Capitol Hill said.

President Trump has also called for speedy passage of a measure focused just on small business.

Democrats want changes to the small-business loan program to help firms that were initially shut out of the assistance receive funds going forward.

Sen. Chris Van Hollen (D., Md.) said Saturday that the Senate should do more than increase the small-business funding. “We also need to ensure the funds are going to everybody who needs it, not just businesses with the best banking connections,” he said.

Democrats also say additional aid to state and local governments is just as urgent as expanding the small-business program. The National Governors Association—led by Maryland Gov. Larry Hogan, a Republican, and New York Gov. Andrew Cuomo, a Democrat—called on the federal government to provide immediately $500 billion in aid to state governments.

The pair warned in a statement Saturday that without new funding, states—whose budgets have been decimated by the pandemic—may soon need to cut other government services. They said federal aid shouldn’t be limited to coronavirus-related expenses and should help cover broader budget gaps.

“In the absence of unrestricted fiscal support of at least $500 billion from the federal government, states will have to confront the prospect of significant reductions to critically important services all across this country,” the governors said.

“Don’t play games and say, ‘I will give you that and keep this successful program alive if you give me these other things, like the Kennedy Center debacle,’” he said. “We got to stay away from those kinds of games. Hopefully we can get focused back on making sure this Paycheck Protection Program stays afloat, not just for the million businesses that already applied, but for the other maybe million businesses that are waiting to come.”

Republicans have indicated that they are open to providing more funding to state and local governments and hospitals—but in a later bill. Lawmakers are treating the negotiations over the current changes as an interim step before a bigger, more ambitious relief package.

Ahead of talks on a broader relief bill, some Democrats are seeking changes to the way aid is disbursed, proposing public assistance that automatically kicks in during bad economic conditions.