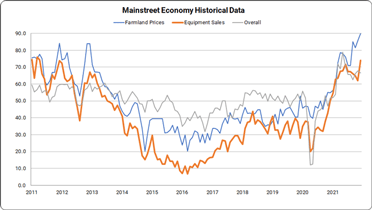 For the 13th straight month, the Creighton University Rural Mainstreet Index (RMI) remained above growth neutral, according to the monthly survey of bank CEOs in rural areas.

The overall reading for December slipped to 66.7 from November’s 67.7.

The December farm equipment-sales index, however, soared to 74.1 from 62.1 in November. This is the 13th straight month that the index has advanced above growth neutral and the strongest index recorded since April 2011.

The indices range between 0 and 100 with 50 representing growth neutral.

“Solid grain prices, the Federal Reserve’s record-low interest rates, and growing exports have underpinned the Rural Mainstreet Economy. USDA data show that 2021 year-to-date agriculture exports are more than 20.7 percent above that for the same period in 2020. This has been an important factor supporting the Rural Mainstreet economy,” said Ernie Goss, chair of regional economics at Creighton University.

Some bankers expressed concern. Jeff Bonnett, a bank CEO in Havana, Ill., said, inflation “is real and affecting folks in our service areas.”

Steve Simon, a bank CEO in Huxley, Iowa, reported that “yields and prices ended being up over projections for 2021, but it appears land costs and all crop inputs will be up significantly in 2022.”

Only 3.3 percent of bankers reported that farmers in their area were in financial distress with a greater need for borrowing.

Also shattering records was the farmland price index. It improved to a record high of 90 from October’s 85.5, which was also a record.

After declining for five straight months, the confidence index, which reflects bank CEO expectations for the economy six months out, rose to 55.2 from 48.4 in November.

The Rural Mainstreet Index (RMI) focuses on about 200 rural communities with an average population of 1,300 in 10 states.