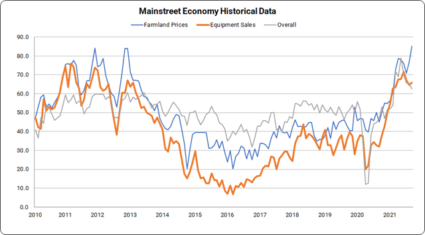 For the fourth straight month, the overall Rural Mainstreet Index dropped, but even with this trickle downward, the index has remained in growth territory for 10 straight months.

The index ranges between 0 and 100; a reading above 50 represents growth and below represents contraction. The September reading was 62.5 compared to August’s 65.3.

Creighton University surveys bank CEOs in rural areas of a 10-state region dependent on agriculture and/or energy to produce these findings each month.

“Solid grain prices, the Federal Reserve’s record-low interest rates, and growing exports have underpinned the Rural Mainstreet Economy. USDA data show that 2021 year-to-date agriculture exports are more than 27.6 percent above that for the same period in 2020. This has been an important factor supporting the Rural Mainstreet economy,” said Ernie Goss, chair of regional economics at Creighton University.

The September farm equipment-sales index climbed to 66.0 from 64.7. Readings over the last several months represent the strongest consistent growth in the equipment sales index since 2012.

The confidence index, which reflects bank CEO expectations for the economy six months out, increased for the first time since May of this year to 65.4 from August’s 59.7.