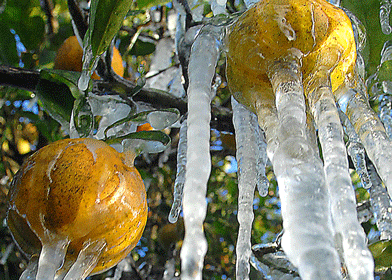 Bitter cold and power outages created a crisis for some Texas farms and ranches recently, leaving livestock dead from exposure and causing fears that herds could run short of food and water.

Meanwhile, forced shutdowns of plants that process milk and make feed disrupted the state’s agricultural supply chains. Some farmers were forced to dump tankers of milk on fields because it could not be processed, and state agriculture officials feared livestock may have to be euthanized if they could not be watered and fed.

“No feed, no water, and no heat do not make for a good situation,” said Sid Miller, Texas agriculture commissioner. Miller last week said he was urging state utilities to restore electricity to rural areas—some of which he said had gone without power for more than 30 hours straight—while fielding calls from cattlemen losing calves to the cold and poultry farmers struggling with frozen water pipes.

For growers, understanding the full weight of the damage is weeks away, although Texas governor Greg Abbott said crop losses will total at least $300 million.

Juan Anciso with the AgriLife Extension said the winter conditions rival a historic hit to Texas farmers in December 1989.

“We’ll know if it ranks with ’89 in a few weeks, but temperatures are well below the threshold for crops and for long periods,” he said. “That’s not a good combination for growers.”

Oranges were frozen solid, and some grapefruits were nearly frozen through, Anciso said. The good news: Eighty percent of the orange crop and two-thirds of grapefruits were harvested before the storm.

Anciso said the crop losses will be significant for producers, but the lasting damage could be tree losses.

“A lot of citrus guys are running their sprinklers to insulate their trees,” he said. “They can take the death of limbs up to one inch in diameter, but you get into losing four-inch limbs, you’re effectively crowning the tree. That’s not good.”

Some warm-season crops likely also will be harmed, he said. Watermelons were being started in high tunnels, which mimic greenhouse conditions, but those structures do not protect plants from severe cold.

Horticulturists predict diminished yields or a second round of planting for a number of crops, including potatoes, corn, sorghum, peaches, strawberries, wine grapes, pecans and berries.

“Peach trees that had started budding, those buds are going to be toast at 15 degrees,” said Larry Stein with AgriLife Extension. “Any active growth could be problematic. We could see temperatures pop the wood. We may not see the damage this spring, but eventually those limbs will die back where the tissue is damaged.”