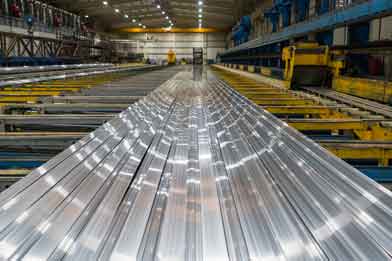 The White House said certain types of aluminum were surging into the U.S. and depressing the industry. The administration argued that a depressed U.S. aluminum industry threatens national security.

“Earlier today I signed a proclamation that defends American industry by reimposing aluminum tariffs on Canada,” President Trump said during a speech at a Whirlpool factory.

“Canada was taking advantage of us, as usual,” he said. “The aluminum business was being decimated by Canada, very unfair to our jobs and our great aluminum workers.”

Canada’s deputy prime minister, Chrystia Freeland, who was a key negotiator in the recent trade agreement, responded, saying the tariffs were “unwarranted and unacceptable.”

“In the time of a global pandemic and an economic crisis, the last thing Canadian and American workers need is new tariffs that will raise costs for manufacturers and consumers, impede the free flow of trade, and hurt provincial and state economies,” she said.

Freeland vowed that Canada would retaliate with proportional tariffs on U.S. exports to Canada.

Major business groups, including the U.S. Chamber of Commerce, the American Automotive Policy Council, which represents the big-three auto makers, and the Beer Institute, criticized the president’s decision to reopen a trade fight with a traditional close economic ally. They say the tariffs violate the spirit of the free trade agreements.

Because of their national security justification, however, such tariffs don’t legally violate trade agreements.