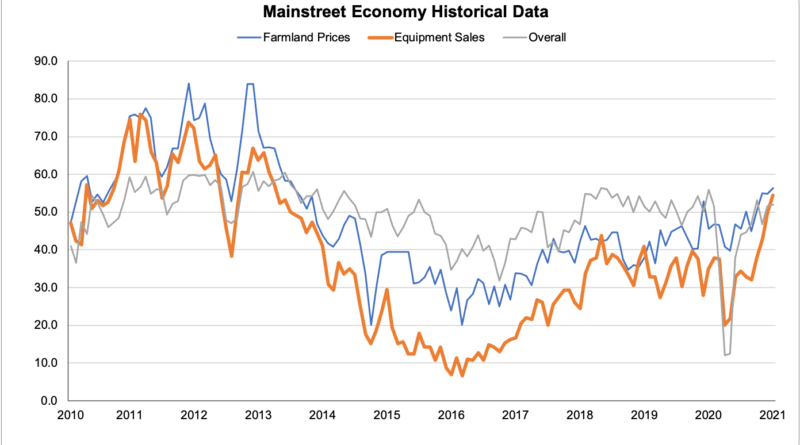 For the third time in the past four months, the Creighton University Rural Mainstreet Index (RMI) climbed above growth neutral. The index increased to its second highest level in 13 months.

The overall index for January rose to 52.0 from December’s 51.6. The index ranges between 0 and 100 with a reading of 50.0 representing growth neutral.

The January farm equipment-sales index rose to 54.5, its highest reading since April 2013, and up from 50.2 in December. After 86 straight months of readings below growth neutral, farm equipment sales bounced into growth territory in December.

This year, about 44 percent of bank CEOs expect low loan demand to be the greatest issue facing their banks for 2021. Only 7 percent of survey respondents considered that a top concern a year ago.

Likewise, a year ago, 32 percent of bankers indicated that rising loan defaults and bankruptcies were their greatest concern. This year, 4 percent of survey respondents noted that as their top concern.

The confidence index, which reflects bank CEO expectations for the economy six months out, declined slightly to a still healthy 60.0 from December’s 62.9.

This survey represents an early snapshot of the economy of rural agriculturally and energy-dependent portions of the nation. The index focuses on about 200 communities with an average population of 1,300 in 10 states.