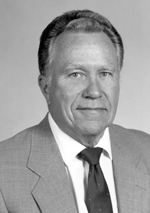 We are sad to report the recent death of Lyle Koontz, who served as President of our Association in 1986-87 and as Treasurer from 1987-1992. Lyle was loved and respected by those in our industry who had the pleasure of knowing and working with him during his days as Vice President at Great Plains Industries in Wichita, KS.

Lyle Koontz was recruited by Great Plains Ventures founder Charles Peer, following a 20-year tenure in engineering and sales at General Electric Co. Along with Ken Rix, a former engineer for Gates Learjet, the three men helped design a cooler for farm tractors and later formed Great Plains Industries, which joined the Farm Equipment Manufacturers Association in 1972. The company was blessed with early success and in its third year, the company sold 10,000 units.

“Every farmer in America was putting a cab on his tractor and combine in the early ‘70s,” Koontz, told the Wichita Eagle in a 1993 interview. “We were fortunate,” Koontz said. “We made a lot of money to start with real quickly. So we had a lot of money to invest.”

Recruiting Koontz and Rix also gave the young company depth. Rix understood manufacturing. Koontz knew sales and marketing. Peer was skilled at raising money. “I don’t think one of us could have done it,” Koontz said. “I think that’s one reason why a lot of companies fail. One guy tries to do it all.”

The three men wanted to grow, and acquisitions were a way to grow quickly. In 1975, Great Plains Industries bought Uniflo. In 1978, it bought Hillsboro Industries. That year, the trio formed Great Plains Ventures, the holding company.

In his interview with the Wichita Eagle, Lyle gave what he found the best reason for diversifying, “I sleep better at night,” he said.

Before success in business, Lyle was already well know in Kansas for his Kansas State record of three interceptions in a single game against Oklahoma A&M (now Oklahoma State) in 1949. Lyle remained an avid KSU fan and was in attendance the day his record was broken 43-years later.

Lyle was 87 years old and had lost his wife of 62 years, Carolyn, earlier this year. He is survived by children: Kathy Littleton, Sharon Fry, Steve, Kenneth, and Richard Koontz; seven grandchildren; and three great-grandchildren. We have been told a memorial service will be scheduled later this summer.