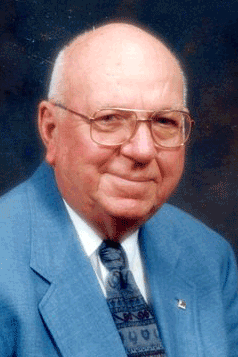 The Farm Equipment Manufacturers Association regrets to report the death of one of our most beloved former presidents, George D. Schumacher. George was elected to our Board of Directors in 1972 and served through 1981. Our condolences go out to his family and many friends.

George, a long-time resident of Great Bend, KS, was the founder and CEO of Great Bend Manufacturing Company from 1962 to 1993. He lived a long and rich life, respected as an elder in the Presbyterian Church and as a participant in many community activities such as Rotary, Elks, American Legion, and Masonic Lodge.

Of his many accomplishments, George was president of the Farm Equipment Manufacturers Association from 1979-1980, a Great Bend city councilman, and an active supporter of his beloved Kansas State University. He was a WWII veteran and served stateside.

Vernon Schmidt, Executive VP of the Farm Equipment Manufacturer’s Association, said, “Our Association and the farm equipment industry are better today because of his willingness to give of his time and God-given talents. He will be remembered as one of our very best leaders, as he always had a special place in his heart for our group of manufacturers.”

Online condolences may be offered at mooresfuneralchapel.com.