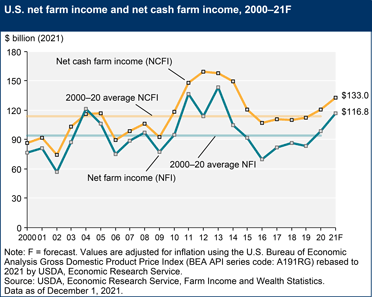 The service forecasts 2021 net farm income at $116.8 billion, a 23 percent increase from 2020 profits and the highest inflation-adjusted profit level farmers have earned since 2013.

This forecast is $4 billion higher than a September projection from ERS, due largely to corn markets.

The chief driver of the uptick in farm incomes relative to 2020 levels is due in large part to higher commodity prices. Rising crop prices added nearly $41 billion to 2021 profits while another $28 billion was added to the value of livestock receipts.

Corn prices in 2021/22 will be the highest since 2012/13 and soybean prices are slated to notch the second-highest price on record for this year. High broiler and hog prices were the top contributors to the first annual increase in total animal product receipts since 2017, though dairy cash receipts are expected to decline after inflation adjustments.

The biggest share of increasing crop cash receipts this year are from corn, which is up 47 percent, wheat, up 21 percent, and soybean, up 16 percent.

Those gains came without the aid of government payments, which are expected to fall a staggering 40 percent from 2020 levels to $27 billion. Last year, federal payments accounted for 48 percent of U.S. net farm income.

Rising production costs also ate away at farm profit margins across the U.S. this year. The latest ERS estimates peg rising fuel, raw materials, production and logistics costs as the primary drivers behind the nearly $30 million increase in production expenses between 2020 and 2021.

Data for this forecast was compiled in September.

Despite volatile markets and turbulent economic conditions, farmers are poised to end this year on a high note.