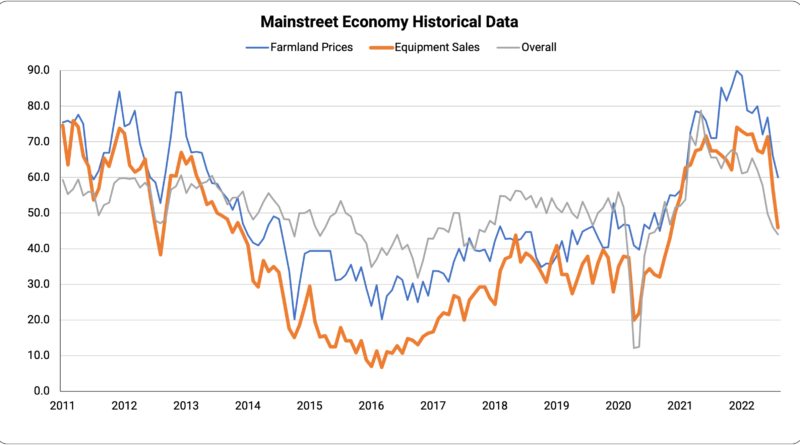 August 2022 Survey Results at a Glance

OMAHA, Neb. (August 18, 2022) — The Creighton University Rural Mainstreet Index (RMI) fell for the fifth straight month, sinking below growth neutral for a third consecutive month according to the monthly survey of bank CEOs in rural areas of a 10-state region dependent on agriculture and/or energy.

Farm equipment sales: The August farm equipment-sales index sank to 45.9 from 56.5 in July. After 20 straight months of advancing above growth neutral, the index unexpectedly dropped below the threshold to its lowest level since November 2020.

Bank CEOs were asked about their assessment of the Inflation Reduction Act. On average, more than half, or 52.2%, expect spending and taxes related to the act to increase inflation and add to the federal deficit.

Among bankers naming drought as an area of concern, Jim Eckert, CEO of Anchor State Bank in Anchor, IL, said “In our area, crops generally look good, but could use a rain. There are small pockets which are very dry and without some timely rains, we will have an early harvest this year.”

Farming and ranching: The region’s farmland price index for August declined to 60.0 from the 66.0 in July, marking the 23rd straight month the index has moved above growth neutral. August’s solid reading was the lowest index since February 2021.

Farm equipment sales: The August farm equipment-sales index sank to 45.9 from 56.5 in July. After 20 straight months of advancing above growth neutral, the index unexpectedly dropped below the threshold to its lowest level since November 2020.

Banking: The August loan volume index climbed to a strong 73.9 from 72.0 in July. The checking-deposit index was unchanged from 47.9 in July, while the index for certificates of deposit and other savings instruments increased to 35.4 from 33.3 in July. “Higher costs of farm inputs and softer agriculture commodity prices supported stronger borrowing from farmers,” said Goss.

Even with significant 2022 input price increases over 2021 levels, bankers expect to record a 1.7% decline in farm loan delinquencies over the next 12 months.

Hiring: The new hiring index fell to 52.0 from 60.9 in July. Labor shortages continue to be a significant issue constraining growth for Rural Mainstreet businesses. Despite labor shortages, the Rural Mainstreet expanded non-farm employment by 3.4% over the past 12 months. This compares to an identical 3.4% expansion for urban areas of the same 10 states for the same period of time.

Confidence: The slowing economy, strong energy prices and agriculture input prices constrained the business confidence index to 38.0 in August, up from 26.0 in July.