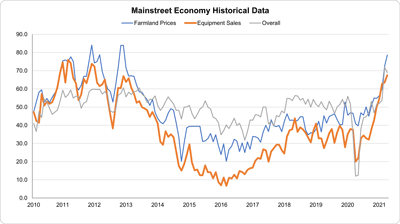 The Rural Mainstreet Index for April slipped to a healthy 69 from a record high 71.9 in March. About 38 percent of bank CEOs reported that their local economy expanded between March and April.

The April farm equipment-sales index rose to 67.5, its highest level since 2013, and up from March’s very strong 63.5. Farm equipment sales have bounced into growth territory for the last five months.

The farmland price index recorded its seventh straight month of farmland prices above growth neutral. Bankers reported that approximately 9.1 percent of farmland sales over the past the six months have gone to nonfarmer investors.

The confidence index, which reflects bank CEO expectations for the economy six months out, fell to a healthy 72.4 from 76.7 in March.