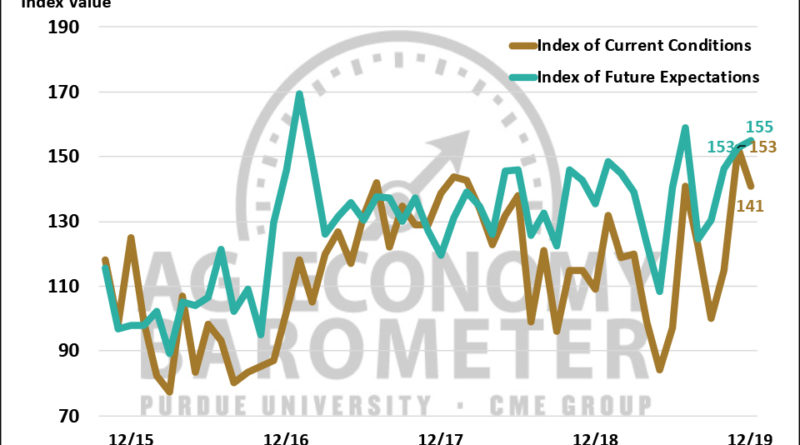 The Ag Economy Barometer drifted sideways in December to a reading of 150 compared to 153 in November.

The Farm Capital Investment Index, which reflects farmers’ willingness to invest in equipment and other capital, ticked up to 72, which concluded 2019 at the highest investment index value for the year.

Although the overall reading changed little, the survey revealed a shift in producers’ perspective regarding both their farms’ and the production ag sector’s economic health.

Producers expressed less confidence than a month earlier about current economic conditions; the Index of Current Conditions declined by 12 points to 141 from November to December.

In contrast, producers’ expectations for the future remained strong; the Index of Future Expectations rose slightly from 153 in November to 155.

A slim majority (52 percent) of farmers on the December barometer survey indicated that their farm’s financial performance in 2019 matched their initial budget projections.

To better assess the level of financial stress among U.S. farms, researchers asked producers in November and December whether they expected their farm’s operating loan in 2020 to be larger than, about the same, or smaller than in 2019. About one in five farmers expect to have a larger operating loan in 2020. About three in 10 of those operations indicated the reason for the larger operating loan is that they expect to carry over unpaid operating debt from 2019. Responses to these two questions suggest that about 6 percent of farms surveyed in late 2019 were experiencing significant financial stress.

The Purdue University/CME Group Ag Economy Barometer is a nationwide measure of the health of the national agricultural economy. Results are based on responses from a survey of 400 agricultural producers.