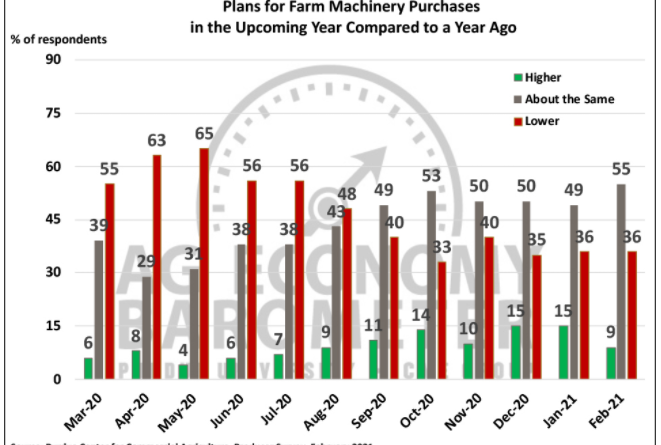 The overall index for February was 165. That compares to 167 in January.
The Ag Economy Barometer assesses producer sentiment through telephone surveys of 400 farmers. It monitors their opinions on current economic conditions and expectations for the future. As has been the case for the past months, farmers feel better about current circumstances but waver in their hopes for what’s ahead.

The Farm Capital Investment Index, which assesses farmers’ willingness to make significant investments on the farm, fell to 88 in February compared to 93 in December and January. Still, the index in February stood at its third-highest reading since data collection began in 2015 and was 16 points higher than before the pandemic began.

Farmers in February were a bit less optimistic regarding their upcoming farm machinery purchase plans than they were in December and January. The percentage of producers who intend to increase their machinery purchases in the upcoming year dipped to 9 percent. It was 15 percent the prior two months.

In February 2020, in the days before COVID-19 dominated our lives, the overall Ag Economy Barometer was 168.