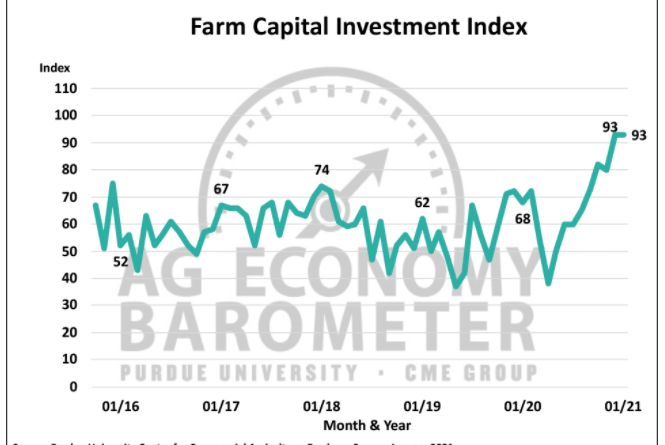 The Purdue University/CME Group Ag Economy Barometer dropped seven points in January to a reading of 167. While the Index of Current Conditions remained relatively flat, the Index of Future Expectations fell 10 points.

The Farm Capital Investment Index—the measure of farmers’ willingness, in part, to buy equipment—held strong at its record high of 93 for the past two months. The percentage of farmers expecting to increase their machinery purchases also held at its highest level of the last year at 15 percent.

Since its peak in October, the Ag Economy Barometer has fallen 9 percent, all attributable to weaker expectations for the future. The Index of Future Expectations has fallen 19 percent since October, while the Index of Current Conditions rose 12 percent over the same time period.

The Ag Economy Barometer is calculated each month from 400 U.S. agricultural producers’ responses to a telephone survey. This month’s survey was conducted from Jan.18-22.

Interest in capturing carbon on farms that agree to follow specified production practices has increased as several firms have begun offering contracts to farmers. Thirty percent of respondents in the January survey said they are aware of opportunities to receive a payment for capturing carbon. Among the 30 percent aware of these opportunities, 22 percent said they have actively engaged in discussions about receiving a carbon capture payment.

This implies that 6 to 7 percent of the farmers who responded have given consideration to contractually sequestering carbon.