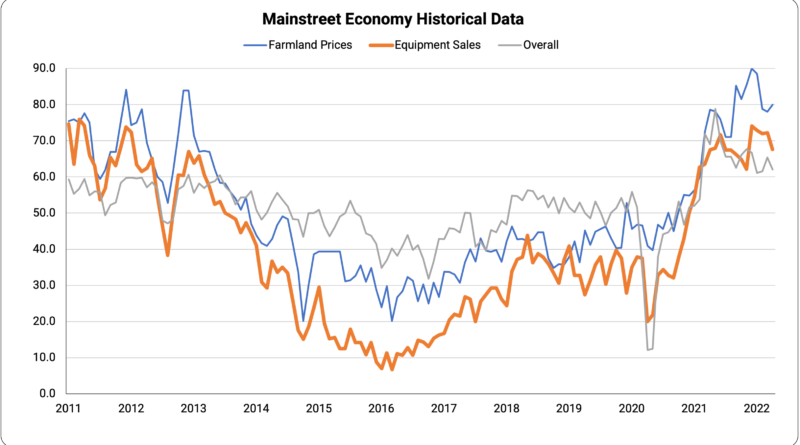 April Survey Results at a Glance:

The Creighton University Rural Mainstreet Index (RMI) fell from March’s healthy reading and remained above growth neutral for the 17th straight month, according to the monthly survey of bank CEOs in rural areas of a ten-state region dependent on agriculture and/or energy.

Overall: The region’s overall reading for April declined to 62.0 from March’s 65.4. The index ranges between 0 and 100 with a reading of 50.0 representing growth neutral.

“The region recorded a 34% gain in farm commodity prices over the past 12 months, but low short-term interest rates and healthy farm income have underpinned the Rural Mainstreet Economy,” said Ernie Goss, PhD, Jack A. MacAllister Chair in Regional Economics at Creighton University’s Heider College of Business.

This month bankers were asked to forecast the impact of President Biden’s emergency waiver on the summer production of E-15 ethanol. Fewer than 4 of 10 bankers, or 39.1%, expect the move to have a positive impact. More than half, or 56.5%, expect the waiver to have little or no impact, with the remaining 4.4% anticipating a negative impact.

Farm equipment sales: The April farm equipment-sales index declined to 67.6 from 72.2 in March. This was the 17th straight month that the index has advanced above growth neutral. Readings over the past several months are the strongest string of monthly readings recorded since the beginning of the survey in 2006.

Farming and ranching: The region’s farmland price index for April climbed to a strong 80.0 from 78.0 in March, marking the 19th straight month that the index has moved above growth neutral. Over the past several months, the Creighton survey has registered the most consistent and strongest growth in farmland prices since the survey was launched in 2006.

More than 9 of 10 bankers, or 91.7%, expect the Federal Reserve interest rate setting committee to raise short-term interest rates by one-half of one percentage point at its next meeting on May 3-4.

Hiring: The new hiring index expanded to 64.0 from 63.5 in March. Labor shortages continue to be a significant issue constraining growth for Rural Mainstreet businesses.

Even with significant labor constraints, U.S. Bureau of Labor Statistics data indicate that over the last 12 months, the Rural Mainstreet region has experienced a solid 4.5% gain in nonfarm employment (non-seasonally adjusted) compared to a lower 3.1% expansion for urban areas in the ten state region.

Confidence: Russia’s invasion of Ukraine, along with accompanying global trade tensions and surging inflation, pushed the business confidence index to its lowest level since the beginning of the pandemic in Spring 2020. The index, which reflects bank CEO expectations for the economy six months out, plummeted to 39.1 from 54.0 for March. s