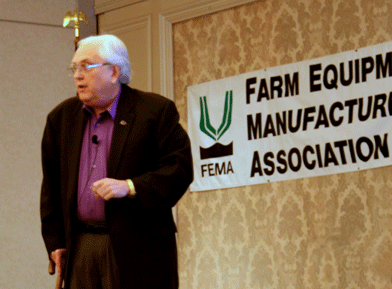 Agricultural economist, farm policy expert, and farmer advocate Barry Flinchbaugh, known for his cigars and his purple Kansas State shirts, died on Nov. 2. He was 78.

Flinchbaugh died in Topeka, Kan., after suffering a fall and a brief hospital stay.

He spoke at a handful of Association conventions and was in demand throughout the ag industry because of his expertise and his willingness to say it straight, regardless of how his thoughts might be received.

He was a fixture at Kansas State University beginning in 1971. He taught agriculture economics and farm policy throughout his tenure and was a professor emeritus at the time of his death.

Flinchbaugh advised elected leaders on both sides of the aisle, secretaries of agriculture and leaders on the House and Senate agriculture committees. He contributed to every U.S. farm bill since 1968.

“Essentially what he would do was help policymakers, farmers or anybody that would listen to understand that, ‘If this is the choice that is made, these are the economics that would follow,’” Featherstone said. “I think he was very good at helping policymakers design farm policy such that it would meet its intended goals, so they would anticipate the farmers’ reaction to that policy.”

Others commented on his candor.

“He called’em like he saw them regardless of political ideology,” said Scott Yates with the Washington Grain Commission. “An interview with him was always an adventure because I never knew what sacred cow he was going to kill. In my mind, Flinchbaugh was a true non-partisan whose views were steeped in years of study and observation. And his wit! Oh, my!”

A news release from KSU characterized it this way: “He was known to lay out the facts of an issue whether it was politically correct or not… A farmer in Colby once said about Flinchbaugh: ‘I do not agree with a damn thing you said, but the next time you are in town making a speech, I will be here.’”

Flinchbaugh, who lived in Manhattan, Kansas, is survived by his wife, Cathy