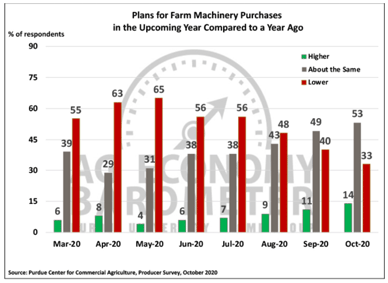 The Farm Capital Investment Index, which reflects farmers’ willingness to buy equipment and make other big-ticket investments, also hit an all-time high in October, increasing by nine points to 82.

The barometer is based on responses from 400 U.S. agricultural producers surveyed from Oct. 19-23.

“Since bottoming out this summer, the ag economy has rebounded sharply,” said James Mintert, the barometer’s principal investigator and director of Purdue University’s Center for Commercial Agriculture. “Together the combination of good yields, a rally in crop prices and CFAP 2 payments set the stage for an all-time high in the barometer and farmer sentiment.”

Nearly six out of 10 respondents said they expect to see China fulfill the food and agricultural import requirements outlined in the Phase One trade agreement with the U.S., compared with just 47 percent in September.

When asked for their overall perspective on U.S. ag exports, the percentage of producers expecting exports to rise over the next five years increased to 65 percent in October, up from 58 percent in September.