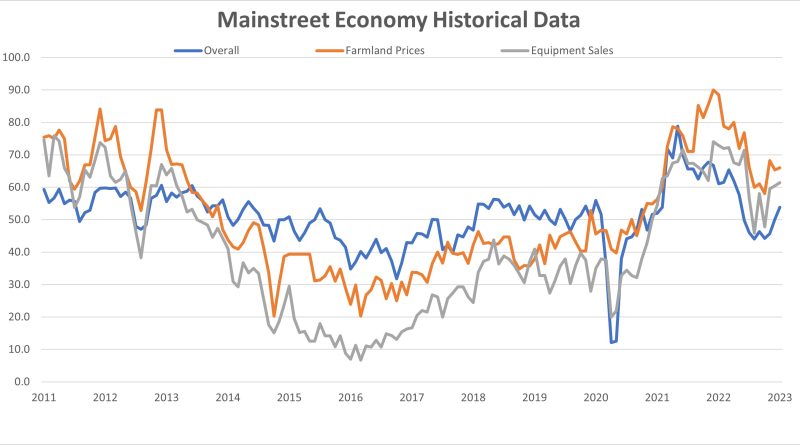 As a result of strong farm financial conditions, the Farm equipment-sales index climbed to 61.4, its highest level since June of last year, and up from 60.4 in December. The index has risen above growth neutral for 24 of the last 26 months.

After six straight months of below growth neutral readings, the Creighton University Rural Mainstreet Index (RMI) climbed above the growth neutral threshold, 50.0, for a second consecutive month, according to the monthly survey of bank CEOs in rural areas of a 10-state region dependent on agriculture and/or energy.

Banking: The January loan volume index declined to a still solid 58.0 from 72.1 in December. The checking-deposit index increased to 70.0 from December’s 48.1, while the index for certificates of deposit and other savings instruments soared to 72.0, a record high, from 51.9 in December.

Hiring: The new hiring index for January increased to 53.9 from December’s 49.1. Labor shortages continue to be a significant issue constraining growth for Rural Mainstreet businesses.

Confidence: The slowing economy, higher borrowing costs and labor shortages continued to constrain the business confidence index to a weak 40.4 from 29.6 in December. “Over the past 10 months, the regional confidence index has fallen to levels indicating a very negative outlook,” said Goss.

The survey represents an early snapshot of the economy of rural agriculturally and energy-dependent portions of the nation. The Rural Mainstreet Index is a unique index covering 10 regional states, focusing on approximately 200 rural communities with an average population of 1,300. The index provides the most current real-time analysis of the rural economy. Goss and Bill McQuillan, former chairman of the Independent Community Banks of America, created the monthly economic survey and launched it in January 2006.