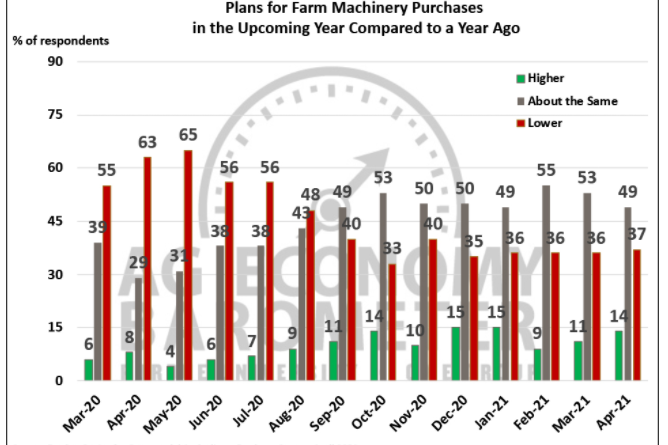 The Purdue University/CME Group Ag Economy Barometer released Tuesday shows an 83-point increase from April to April in the index that measures the financial performance of farms. The index also rose 13 points from March to April for a current reading of 138.

Half of the 400 farmers surveyed expect this year to financially outperform last year. In March, 39 percent of respondents expressed that level of optimism.

“The strength in commodity prices continues to drive improving expectations for strong financial performance, even as many are seeing rising input costs,” said James Mintert, the barometer’s principal investigator and director of Purdue University’s Center for Commercial Agriculture.

Despite their optimism about finances, farmers reported being less inclined in April to think now is a good time for large investments in buildings and equipment. However, when researchers broke down the data into thoughts on equipment vs. buildings, they discovered that while farmers were reluctant to consider construction projects, a higher percentage of producers planned to invest in machinery in the most recent survey.

“The divergence between the two responses could be reflective of the run-up in building costs and difficulty in scheduling construction projects across the U.S.,” Mintert said.

The monthly barometer showed little movement in other key categories. The overall reading increased by a single point from March. The data showed that farmers were feeling more optimistic about the future in April but a little less so about the current conditions.

This month’s survey was conducted from April 19-23.