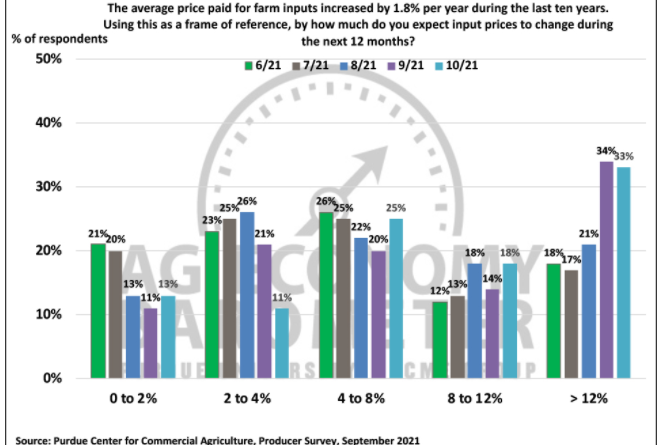 Farmer sentiment weakened in October for the third consecutive month, according to the Ag Economy Barometer, which is based on research conducted by Purdue University and the CME Group.

The overall barometer reading declined by three points from September to October and landed at 121, leaving the index down nearly one-third since its springtime peak.

The Index of Current Conditions declined five points while the Index of Future Expectations fell by two.

The Farm Capital Investment Index rose three points in October—an improvement that still leaves it 50 percent lower than the very optimistic level that existed at the start of 2021.

The dramatic rise in fertilizer prices that’s taken place in recent months is a key factor in concerns about rising input costs. For example, USDA data from Illinois indicates that nitrogen (NH3) prices in October were up 130 percent compared to a year earlier and up over 40 percent compared to last spring while potash and phosphate prices experienced similar price increases.

Data from the Ag Economy Barometer is based on responses from 400 farmers.