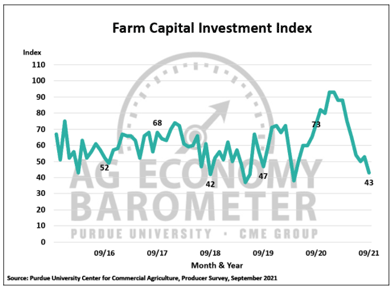 The Ag Economy Barometer declined in September, down 14 points to a reading of 124.

With producers feeling less optimistic about both current conditions on their farming operations as well as their expectations for the future, this is the weakest farmer sentiment reading since July 2020 when the index stood at 118.

The monthly Ag Economy Barometer is published by Purdue University and the CME Group. It reflects responses from 400 U.S. agricultural producers surveyed by phone.

While the Farm Financial Performance Index was unchanged from last month, detailed responses reveal a shift among producers with regard to their farms’ financial performance. In September, fewer farmers said they expected their farms financial performance to match last year’s, while the percentages of producers expecting both worse and better financial performance rose. The increasing divergence in expectations among respondents from August to September could reflect differences in how individual farms managed risk in a period of rapidly fluctuating commodity prices.

The decline in farmer sentiment spilled into the Farm Capital Investment Index, which declined 10 points to a reading of 43, down 50 percent since the beginning of the year and the lowest investment index reading since April 2020.

Fewer farmers this month said they planned to increase their machinery purchases than on the August survey. Just 8 percent of respondents plan to increase purchases, down from 10 percent last month. However, in a follow-up question, 55 percent of respondents reported that their farm machinery purchase plans have been impacted by low farm machinery inventories, likely contributing to weak sentiment regarding whether or not now is a good time to make large investments.

Although plans for machinery purchases fell, producers’ plans for new construction rose this month with 13 percent expecting to increase construction of grain bins and farm buildings, up from 8 percent in August.

Producer concerns about rising input costs rose sharply with 34 percent of respondents saying they expect input prices to rise by more than 12 percent in the coming year, which is six times the average farm input inflation rate of the last decade. The 34 percent who expect input costs to increase by more than 12 percent represent a doubling of that sentiment since July.