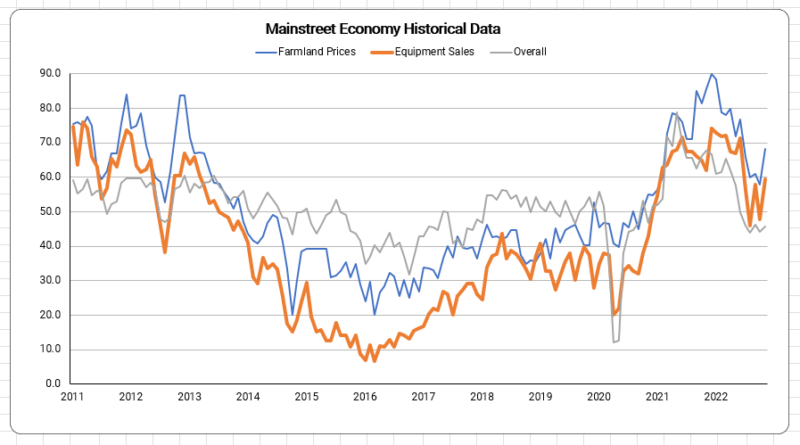 The Creighton University Overall Rural Mainstreet Index (RMI) fell below growth neutral for a sixth consecutive month, according to the monthly survey of bank CEOs in rural areas of a 10-state region dependent on agriculture and/or energy.

“The Rural Mainstreet economy is now experiencing a downturn in economic activity. Last month, almost one in four bankers, or 23.1%, reported that the economy was already in a recession,” said Ernie Goss, PhD, Jack A. MacAllister Chair in Regional Economics at Creighton University.

Farm equipment sales: The farm equipment-sales index jumped to a strong 59.5 from October’s weak 47.8. The index has risen above growth neutral for 22 of the last 24 months.

Farming and ranching: The region’s farmland price index rose to 68.2 from October’s 58.0. This was the 26th straight month that the index has climbed above 50.0.

Banking: The November loan volume index dropped to a still strong 65.8 from 76.8 in October. The checking-deposit index increased to 47.7 from October’s 34.0, while the index for certificates of deposit and other savings instruments slipped to 45.5 from 46.2 in October.

Confidence: The slowing economy, strong energy prices, higher borrowing costs and elevated agriculture input costs pushed the business confidence index down to 27.3 from 30.8 in October. “This is the lowest reading for the confidence index since May 2020,” said Goss.

The survey represents an early snapshot of the economy of rural agriculturally and energy-dependent portions of the nation. The Rural Mainstreet Index is a unique index covering 10 regional states, focusing on approximately 200 rural communities with an average population of 1,300. The index provides the most current real-time analysis of the rural economy. Goss and Bill McQuillan, former chairman of the Independent Community Banks of America, created the monthly economic survey and launched it in January 2006.