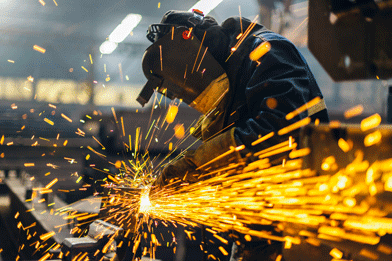 When the economy shut down last year to curb the spread of coronavirus, the hospitality industry took a gut-wrenching hit. Some 8.2 million people who worked in the sector were laid off or furloughed between February and April 2020, according to data from the Bureau of Labor Statistics.

Now that most pandemic restrictions have been lifted, Americans are back to dining out and booking vacations—and business owners are looking to fill nearly 1.6 million openings, a 68 percent increase in openings compared to February 2020.

Contrast that narrative with the manufacturing industry.

Some 1.4 million people were laid off or furloughed from February to April 2020. But as of last month, business owners are hiring for 851,000 positions—a record high for the industry and a 112 percent increase in openings since last February.

Manufacturing firms “are desperate for workers, and they would take anybody in off the street and help them learn what they need to know to start,” said Carolyn Lee with the National Association of Manufacturers.

The record rate of openings in the industry comes as 1.7 million workers over 55 unexpectedly retired during the pandemic, according to a recent report published by the Schwartz Center for Economic Policy Analysis.
Health concerns likely played a big role in pushing older Americans to retire during the pandemic, the report said.

The trend has been particularly troublesome for the manufacturing industry where the median age for workers was 44.4 in 2020, two years higher than the overall median age across all occupations, according to data from the U.S. Census Bureau.

“We definitely have an older workforce,” Lee said. “People are leaving the top end of the funnel, and people [are] not coming in and behind to replace them.”

What’s more, women made up just 29 percent of all manufacturing jobs in May 2021 even though they comprise nearly 50 percent of the workforce, according to BLS data.

That’s not a coincidence considering “we as a society foster from kindergarten: ‘OK girls, you play with the pink doll set and boys, you can have the hardhat and the digger,’” said Nicole Smith, chief economist at Georgetown’s Center on Education and the Workforce.

That has contributed to a significant PR problem in infrastructure and manufacturing where women are convinced that every job requires heavy lifting and a hardhat, Smith added.

Retirement and PR problems aside, some manufacturing firms complain that labor shortages, which employers across the board are confronting, are the reason there’s a record number of openings.

Over the past two months, some 837,000 jobs were added—far below the 1.6 million jobs economists forecast for April and May. Meanwhile, there were 9.3 million unfilled positions in the U.S. in April, according to the Department of Labor’s Job Openings and Labor Turnover Survey.

That’s equivalent to the number of people who are currently unemployed, according to the latest jobs report.

As a result, they’re prematurely cutting some 4 million jobless recipients off from enhanced benefits in the coming weeks—months before they expire in September.

Anecdotally, Lee said she has heard that some applicants are telling manufacturing employers that they’re waiting until enhanced unemployment benefits end in their state before they start a new job, but there’s “no definitive proof” of that.