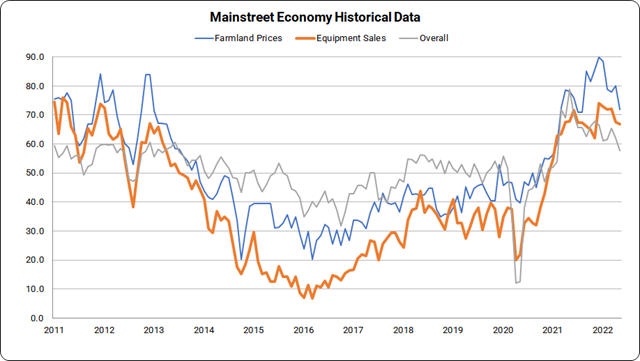 OMAHA, Neb. (May 19, 2022) — The Creighton University Rural Mainstreet Index (RMI) fell from April’s healthy reading and remained above growth neutral for the 18th straight month, according to the monthly survey of bank CEOs in rural areas of a 10-state region dependent on agriculture and/or energy.

“Much like the nation, the growth in the Rural Mainstreet economy is slowing. Supply chain disruptions from transportation bottlenecks and labor shortages continue to constrain growth. Farmers and bankers are bracing for escalating interest rates — both long-term and short-term,” said Ernie Goss, PhD, Jack A. MacAllister Chair in Regional Economics at Creighton University’s Heider College of Business.

Farm equipment sales: The May farm equipment-sales index declined to 66.9 from April’s 67.6. This was the 18th straight month that the index has advanced above growth neutral. Readings over the past several months are the strongest string of monthly readings recorded since the beginning of the survey in 2006.

Farming and Ranching: The region’s farmland price index for May sank to a still strong 72.0 from 80.0 in April, marking the 20th straight month that the index has moved above growth neutral. Over the past several months, the Creighton survey has registered the most consistent and strongest growth in farmland prices since the survey was launched in 2006.

On average, cash rents have risen by 9.6% to $250 per acre for non-irrigated crop land over the past 12 months, according to bankers.

In 2021, the 10-state region exported $10.6 billion of farm commodities, including livestock. Approximately 57.2% of those exports went to Mexico. Despite the rapid rise in the dollar against most currencies, the dollar has depreciated by almost 17% against the Mexican peso. This has made Rural Mainstreet agriculture products more competitively priced in Mexico.

Jim Eckert, president of Anchor State Bank in Anchor, Illinois, reported that “wet weather has our area farmers way behind, but it’s been a bit drier the last week or so. Some soybeans and almost no corn have been planted so far.”

Farming and ranching: The region’s farmland price index for April climbed to a strong 80.0 from 78.0 in March, marking the 19th straight month that the index has moved above growth neutral. Over the past several months, the Creighton survey has registered the most consistent and strongest growth in farmland prices since the survey was launched in 2006.

Banking: The May loan volume index soared to 73.0 from April’s 51.9. The checking-deposit index slumped to 54.0 from April’s 66.0, while the index for certificates of deposit and other savings instruments increased to 40.4 from 39.1 in April. “Escalating costs of farm inputs pushed borrowing up to its highest reading since May 2020,” said Goss.

More than one of ten bankers expect the Federal Reserve to raise rates by 0.75% (75 basis points) at its June meetings. Approximately 70% of bankers anticipate a 0.50% (50 basis points) rate hike at that Fed meeting.