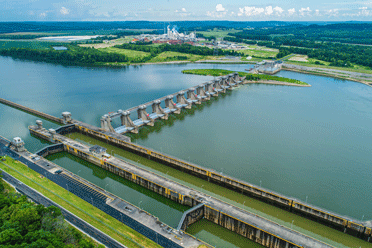 The Biden administration last week announced the release of $14 billion to the Army Corps of Engineers to fund 500 projects focused on easing supply chain problems and addressing climate change.

The spending stems largely from the administration’s $1 trillion infrastructure deal.

There are three specific projects tied to reducing supply bottlenecks by making it easier to transport goods, according to a White House fact sheet. U.S. ports have struggled to manage the inflow of container ships and move containers onto trucks as the economy recovered from the pandemic, resulting in delays in sending goods to consumers and higher prices.

Among the projects being funded for the Army Corps of Engineers is $858 million to replace locks on the Ohio River so that water levels are high enough for large cargo ships.

Also included is $470 million for a new lock in Michigan that is key for shipping iron ore.

The funds also will be invested in the Port of Long Beach, Calif., and Norfolk Harbor in Virginia to accommodate more shipping.