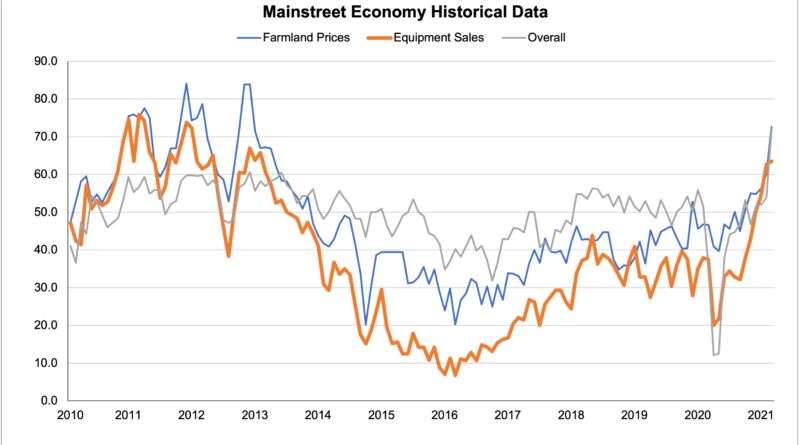 For the fifth time in the past six months, the Creighton University Rural Mainstreet Index climbed above growth neutral. According to the monthly survey of bank CEOs in rural areas of a 10-state region, the index increased to its highest level since the survey launched in January 2006.

The overall index for March soared to a record 71.9 from February’s solid 53.8. The index ranges between 0 and 100 with a reading of 50 representing growth neutral.

The March farm equipment-sales index rose to 63.5, its highest reading since February 2013 and an improvement from the 62.7 reading in February.

About 69 percent of bank CEOs said that their local economy was expanding.

The new hiring index rocketed to 72.9 from 51.9 in February. Despite recent solid job gains for the region, data from the U.S. Bureau of Labor Statistics indicate that nonfarm employment levels for the Rural Mainstreet economy are down by 218,600 (nonseasonally adjusted), or 5 percent, compared to pre-COVID-19 levels.

The confidence index, which reflects bank CEO expectations for the economy six months out, climbed to a healthy 76.7 and up from 64.