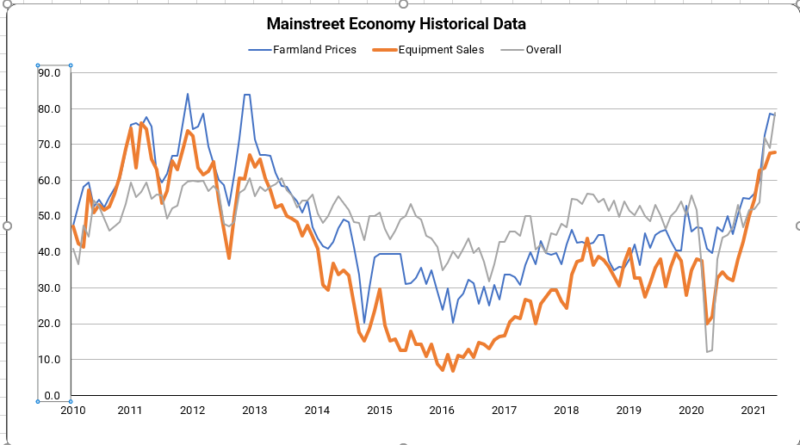 The Creighton University Rural Mainstreet Index (RMI) continues to climb.
The overall index for May jumped to a record high of 78.8 from April’s healthy 69. The index ranges between 0 and 100 with a reading of 50 representing growth neutral.

About 61 percent of bank CEOs reported that their local economy expanded between April and May.

The May farm equipment-sales index rose to 67.9, its highest level since 2013 and up from April’s 67.5. After 86 straight months of readings below growth neutral, farm equipment sales bounced into growth territory for the past six months.

Almost nine of 10 bank CEOs indicated hiring at their bank and in the area was restraining growth.

The confidence index, which reflects bank CEO expectations for the economy six months out, expanded to a very strong 78.8 from April’s 72.4.

However, bankers are concerned about the rapidly rising U.S. budget deficit.

A bank CEO from rural Iowa said this: “When is Congress and the Federal Reserve going to get serious about implementing a plan to annually balance the budget and reduce the federal debt ($27.7 trillion, now equal to 100 percent of U.S. GDP). It’s a problem that is not going away.”

Each month, community bank presidents and CEOs in nonurban agriculturally and energy-dependent portions of a 10-state area are surveyed regarding economic conditions in their communities and their outlooks for the future.