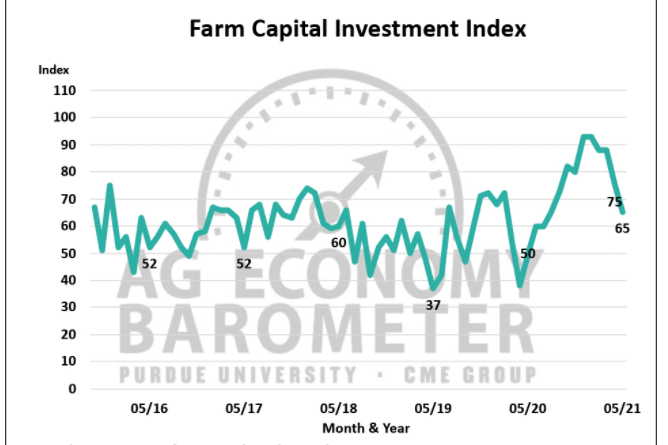 The Ag Economy Barometer declined 20 points in May to 158—the lowest barometer reading since September 2020.

The sentiment indices are based upon responses from 400 U.S. producers. Researchers called farmers from May 10 to 14 to collect the data.

The Farm Capital Investment Index, which examines farmers’ willingness to buy equipment and otherwise invest in capital, declined by 10 points from April to 65. Since peaking in December and January at 93, the investment index has trickled downward, although it remains 30 points above May 2020.

When asked more specifically about their plans for farm machinery purchases, the percentage of farmers who planned to increase their purchases in the next year remained constant from April to May. A portion of respondents though who in April said they expect to keep purchases “about the same” drifted into the category of farmers who said they expect to reduce equipment purchases in the next year.