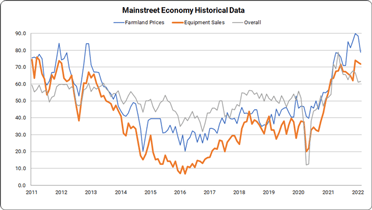 The Rural Mainstreet Index moved above growth neutral for the 15th straight month in the February survey, indicating healthy, consistent growth for the region.

The region’s overall reading for February rose to 61.5 from January’s 61.1. The index ranges between 0 and 100 with a reading of 50.0 representing growth neutral.

The February farm equipment-sales index slipped to a healthy 72.0 from 72.4 in January. This is the 15th straight month that the index has advanced above growth neutral. Readings over the past several months are the strongest string of monthly readings recorded since spring 2011.

The survey, which is led by Creighton University, represents an early snapshot of the economy of rural agriculturally and energy-dependent portions of the nation. The Rural Mainstreet Index (RMI) covers 10 regional states by focusing on about 200 rural communities with an average population of 1,300.

The new hiring index expanded to 61.5 from 61.1 in January. Labor shortages continue to be a significant issue constraining growth for Rural Mainstreet businesses, survey leaders said.

After moving higher for two straight months, the confidence index, which reflects bank CEO expectations for the economy six months out, sank to a weak 51.9 from January’s reading of 61.1.