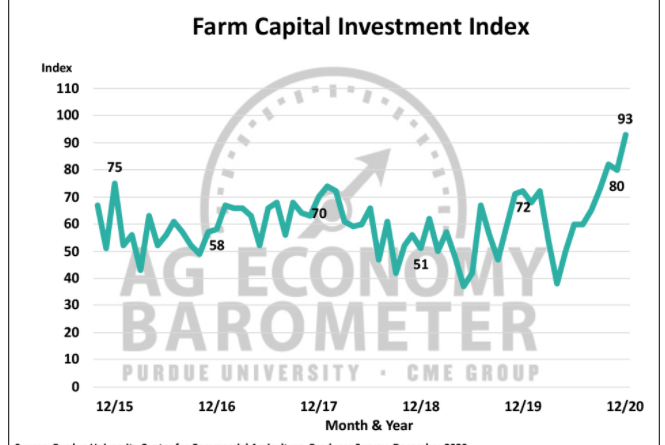 Farmers feel good about their financial positions and are more inclined to make big investments. That is according to the December Purdue University/CME Group Ag Economy Barometer released Tuesday.

The overall barometer increased by seven points from November to a reading of 174 in December. The Index of Current Conditions climbed 15 points to 202.

The Farm Capital Investment Index, which measures producers’ willingness to make significant investments, increased 13 points in December to a record high of 93.

Farmers were less optimistic when asked about the ongoing trade dispute between U.S. and China. In the first quarter of 2020, an average of 76 percent of respondents thought the trade dispute’s ultimate resolution would favor U.S. agriculture. By December, it dropped to an all-time survey low of 47 percent.

Researchers collected responses from 400 farmers during a phone survey from Dec. 7 to 11.