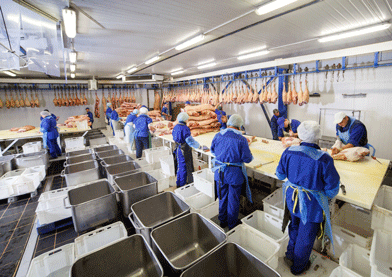 JBS canceled shifts at several of its meat processing plants in the U.S. and Canada on Tuesday after the company was hit by a ransomware attack. The attack threatens to disrupt food supply chains and further inflate food prices.

The White House said Tuesday that JBS informed the U.S. government the attack originated from a criminal organization likely based in Russia.

JBS is the world’s largest meatpacker. The incident caused its Australian operations to shut down on Monday and has stopped livestock slaughter at its plants in several U.S. states.

A White House spokeswoman said the U.S. has contacted Russia’s government and that the FBI is investigating.

JBS reported the incident a few weeks after a ransomware attack on Colonial Pipeline, the largest fuel pipeline in the United States, crippled fuel delivery for several days in the U.S. Southeast.

The average unit price for U.S. fresh beef in April rose by 5 percent from March and was up by about 10 percent from a year earlier, according to NielsenIQ data. Pork and chicken prices are up about 5.4 percent from last year.